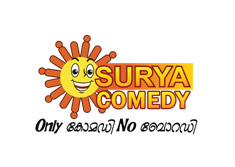 Sun TV Network Limited, one of the largest television broadcasters in the country with the reach of more than 95 million households in India is launching a new channel in Kerala.

According to SUN TV Network’s official spokesperson ,“Humour is an inherent quality among the Kerala audiences and the market boasts of some of the best comic talent in the world of entertainment. The channel is ready to offer the Malayali audience variety of shows in various shades of humour.”

Surya Comedy – Only Comedy No Boradi (only comedy and no boredom) is first of its kind channel in Malayalam where content will be focused on comedy 24 hours a day and is set to go on air from April 29th, 2017.

Some of the humour programmes includes:

The world of Malayalam television, where news, soaps  and talk shows have always taken centre stage, now heralds humour with the new channel Surya Comedy, launching on April 29, 2017 and is set to make the Malayalam audiences laugh out loud with its humour packed shows and blockbuster comedy  films.