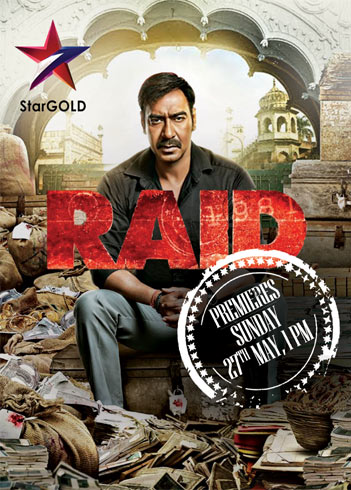 This May, Star Gold to bring the World Television Premiere of Raid. Touted as first Bollywood project to be based on an Income Tax raid, this Ajay Devgn starrer hit will be showcased on 27th May 2018, Sunday at 1 PM on Star Gold.

The Home of Blockbuster gives you an opportunity to witness the latest action-crime thriller, “Raid”, telecasting within 2 months of its theatrical release. Helmed by Raj Kumar Gupta, who is known for directing movies like No One Killed Jessica and Aamir yet again brings another gripping story which is rooted in reality.

Based on a true incident from the 1980s, Raid explores one of the most high-profile raids executed in the country, boasting power dialogues and eminent star cast. Starring Ajay Devgn as an honest government officer and masterful Saurabh Shukla in the role of a wealthy goon, the drama also features Ileana D’Cruz portraying the role of Ajay’s wife. The couple seem to have teamed up together for the second time after Baadshaho.

Centered around the longest and well-crafted Income Tax raids of the country, Raid showcases the struggle an of an upright Income Tax Officer, Amay Patnaik who conducts a raid at the mansion of the most powerful man in Lucknow.

Tags:
Previous Article
Sneha Is Glad About Not Being A Showpiece!
Next Article
BBC StoryWorks expands into India