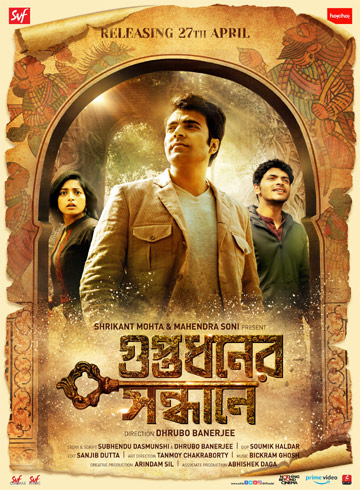 SVF has been producing popular franchises like Byomkesh, Shabor, Kakababu, Feluda, Shankar and Professor Shonku. Introduction of a new franchise is happening for the first time.

‘Guptodhaner Sondhane’ is primarily an adventure film. The film does not aim to reconstruct known stories and characters from literature. Rather, it is a series that gives birth to complete new characters; not on the pages of novels but on the silver screen. The protagonist of the story-Sona da is a qualified professor in History. Therefore, along with adventure, this film will also have elements of history and wit. There will be a combination of action and grey matter, along with nuances of Bengali culture.

The background of this spectacular story will continue to touch the memories of hidden treasure in Bengali history. The hidden treasure of Bengal is not just below the soil but present in the culture, literature, music, folk art, paintings and diverse stories. Three main actors of this generation are forming the trio of this film; Abir Chatterjee, Arjun Chakraborty and Ishaa Saha. Rajatava Dutta would also be an integral part of the film. Sharing screen space with the trio in distinguished characters would be three eminent directors: Goutam Ghose, Kamaleswar Mukherjee and Arindam Sil.

The film is slated to release on 27th of April.