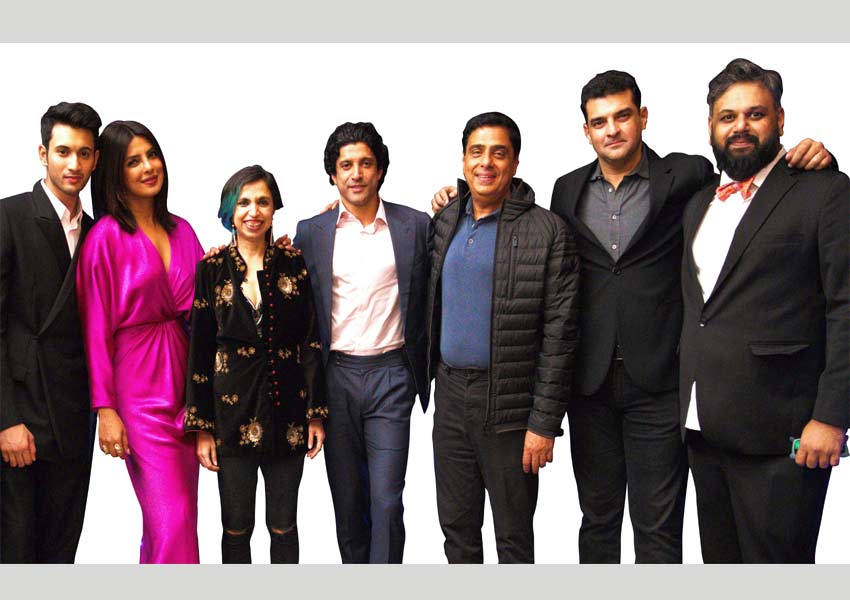 RSVP and Roy Kapur Films‘ The Sky is Pink directed by National Award-winning filmmaker Shonali Bose, had its World Premiere at the 44th Toronto International Film Festival on 13th September 2019.

The only Asian film to be showcased in the Gala Presentation, it received a 15-minute standing ovation and garnered immense acclaim from both audiences and critics present at the screening. The film premiered at the prestigious Roy Thomson Hall and was attended by a sold-out theatre of 2000 people, who gave the film thundering applause. This was followed by another sold-out screening at the 1000-seater Elgin theatre in Toronto, where the film met with the same incredible response. Audiences took to social media to express how blown away they were by the film. They appreciated the performances, the writing and direction, the world-class production values and the sheer beauty of the moving story of a family.

The Sky Is Pink, is a story of a family that never gives up despite all the odds and an amazing love story of a couple that traverses decades and continents, told through the lens of their sassy, sardonic, spunky teenage daughter, Aisha. While Zaira Wasim plays the role of Aisha Chaudhary and Rohit Saraf plays her brother, Priyanka and Farhan play their parents in the movie.

Director Shonali Bose shared, “Watching the film for the first time with an audience is always an unnerving experience. And when it’s a world stage with a lot of expectations and 2,000 people – it’s even more terrifying. So when they laughed out loud multiple times and then wept audibly it was utterly moving and overwhelming. I can’t wait to share this baby of mine with the rest of the world. Especially India.”

Entrepreneur Ronnie Screwvala said, “India has to be a global soft power like no other and for that our stories that must be told need to travel. Global Film Festivals like Toronto is a great platform and it was great to see this is the only Asian film at the Gala Presentation of the Festival in 2019”.

Producer Siddharth Roy Kapur expressed, “I am touched with the love we have received here at the World Premiere and this is just the beginning of what I’m sure will be a special journey for the film. I am thrilled for the entire team that has worked so hard on this very special story.”

Actor and co-producer Priyanka shared, “That moment, when you see the audience connect with your film, is very special and at the World Premiere of The Sky is Pink at TIFF, we were blessed to have so so many many such moments. It’s a wonderful start and I can’t wait to bring this amazing story to audiences across India and the world.”

Actor Farhan Akhtar stated, “It is an honour to have our film screened at TIFF and the response from the audience after the screening was overwhelming. The Sky is Pink is an incredible love story that will stay with you forever.”

Directed by National Award-winning filmmaker Shonali Bose, The Sky is Pink is produced by RSVP and Roy Kapur Films, in association with S K Global and Purple Pebble Pictures. The film is written by Shonali Bose and Nilesh Maniyar, starring Priyanka Chopra Jonas, Farhan Akhtar, Zaira Wasim and Rohit Saraf. The film is slated to release on 11th October 2019.