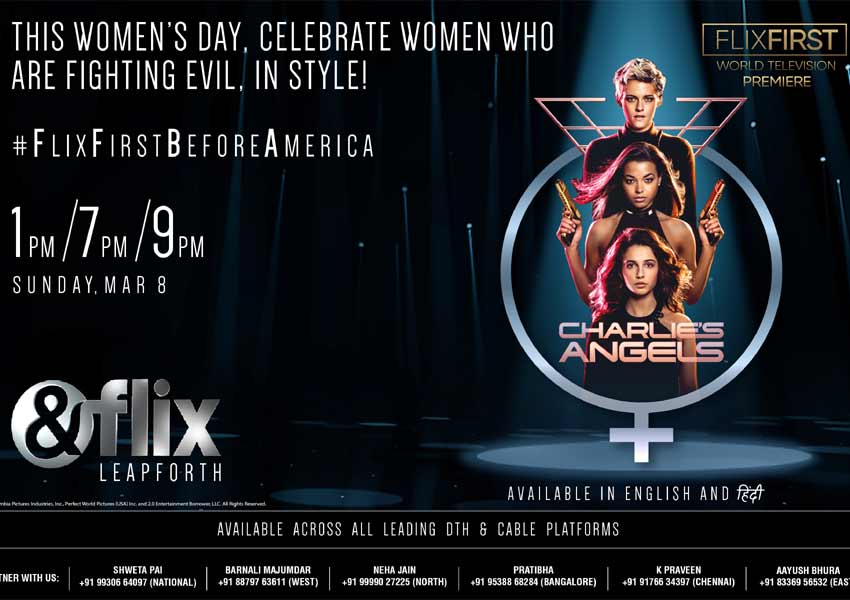 &flix will premiere Charlie’s Angels, an Action Adventure film, before the world as a part of Flix First World Television Premiere. Charlie’s deadly agents put their lives on the line in this epic spy thriller as they are set to save the deadly weapon, Callisto, going in wrong hands. Directed and Written by Three Time Primetime Emmy Award nominee Elizabeth Banks, the movie brings together an exciting line-up starring BAFTA award winner Kristen Stewart essaying the role of Sabina Wilson, Naomi Scott as Elena Houghlin and Ella Balinska portraying the role of Jane Kano. Available on Zee Prime English Pack, the viewers can watch the World Television Premiere of Charlie’s Angels in English and Hindi on Sunday, March 8, 2020 at 1 PM, 7 PM and 9 PM only on &flix

A few personalities whose stories create a force and inspire people to break stereotypes and influence the society. Taking a step further, &flix brings movies like Resident Evil: Afterlife, Miss Bala, Charlie’s Angels, Maleficent, Passengers, Moana, and many more as a build for The World Television Premiere of Charlie’s Angels this International Women’s Day. The channel supports the initiative #EachForEqual as the brand believes that collectively, each one of us can help create a gender equal world.

In Banks’ bold vision, Sabina, Elena, and Jane are working for the mysterious Charles Townsend, whose security and investigative agency named Townsend Agency has grown internationally. With the world’s smartest, bravest, and most highly trained women all over the globe, there are now teams of spies guided by multiple Bosleys taking on the toughest jobs everywhere. With high tech gadgets, new ammunition and fearless attitude, the girls are ready to save the Callisto from going into wrong hands.

Watch the girls fight the crime in their own style as &flix brings the World Television Premiere of Charlie’s Angels on Sunday, March 8, 2020 at 1 PM and 9 PM.