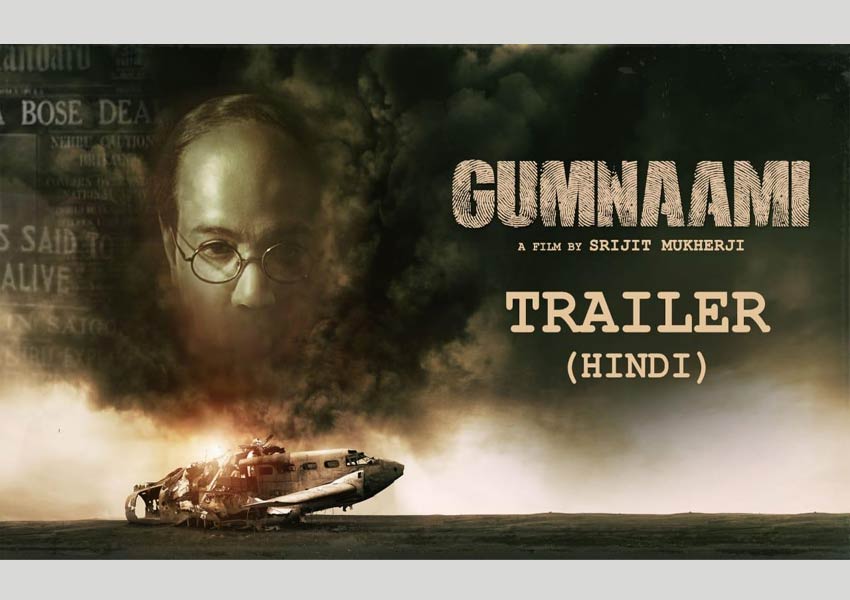 The official trailer of Srijit Mukherji’s much anticipated Pujo release – Gumnaami had it’s inaugural public screening amidst much discussion, debate and contemplation at the Kolkata office of All India Forward Bloc, the political party established by the legendary leader Netaji Subhas Chandra Bose. The trailer has been released online in both Bengali and Hindi languages.

The film Gumnaami which is based on the Mukherjee Commission Hearings that takes us through the various theories on the death and disappearance of one of the greatest freedom fighters of British India – Netaji Subhas Chandra Bose.

After surpassing multiple legal notices, remonstrances from a certain faction of the Bose family and various altercations the awe-inspiring trailer of the film released yesterday in the august presence of Bose family members Jayanti Bose Rakshit ,Arya Kumar Bose , Indranil Mitra, noted researcher on Netaji – Dr. Purabi Roy, and other members of All India Forward Bloc.

The trailer starts with the soulful note “Subhasji” , sung by the immensely talented and nationally acclaimed singer Sonu Nigam, recounting the glories of one of India’s greatest leader Subhas Chandra Bose (portrayed by the Nationally renowned star Prosenjit Chatterjee) .This is followed by a speculation on the various theories that surround the death of Netaji being narrated to the Mukherjee Commission by an investigative journalist(portrayed by Anirban Bhattacharya). The first theory suggests that he died on 18th August 1945 in a plane crash in Taiwan and this remains as the official theory till date. The second theory suggests that he escaped to Russia and was captured and killed in a prison. The third theory being that he escaped the plane crash, travelled back to India and lived in disguise as an ascetic.

The trailer is laden with some power-packed dialogues for instance when the investigative journalist is heard telling the Mukherjee Commission that in independent India every Indian citizen’s surname is ‘Bose’ because they are all family to Netaji, or when asked for water he seeks justice. Finally, the trailer ends with the journalist stating that he isn’t part of any political party but a member of the proud INA (Indian National Army), thus promising the Bengali audience that this 2nd October, they would be travelling through history and commissions to seek answers behind one of the greatest conspiracies in Indian history.

Speaking about the trailer and his upcoming release director Srijit Mukherji said, “Gumnaami is a film that does not give any verdict on what happened to one of our greatest leaders in the country – Netaji Subhas Chandra Bose but prompts the audience and the people of the country to question the fate of this legendary leader. It is my humble attempt to ensure that the forthcoming generations continue in their quest to seek the truth behind the disappearance of one of India’s greatest hero.”

Gumnaami, produced by SVF, starring Prosenjit Chatterjee, Anirban Bhattacharya, Tnusree Chakraborty and others is scheduled to release on 2nd October 2019 in both Bengali & Hindi. The music used in the film is the original soundtrack by INA & D.L.Roy and has been rearranged by National Award Winning music director Indraadip Dasgupta.

Please watch the power-packed trailer below: