TVF’s Tripling Season 2 with Drivezy gears up for launch 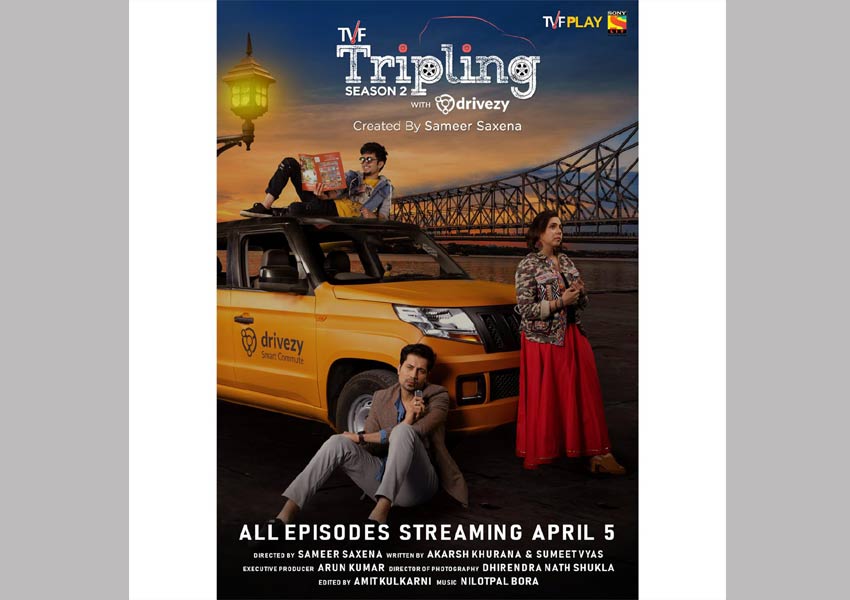 The Viral Fever (TVF) launched the next season of one of its most-loved series – Tripling. Presented by Drivezy as their partner for the journey, in the upcoming season, the show will follow the three siblings – Chandan, Chanchal and Chitvan as they embark on another engaging road-trip. Season 2 of Tripling will be rolled out on 5th April 2019 and will stream on TVFPlay and SonyLIV. SonyLIV is partnering with TVF to launch the much-loved series on its platform which would be available for free viewing. TVF saw massive commercial and critical success with the first season of Tripling, the show is also among the Top 250 shows of all time according to IMDB.

Tripling is directed by Sameer Saxena, the chief content officer and Head – TVF Originals and written by Akarsh Khurana and Sumeet Vyas – who also stars as one of the leads on the show. Alongside Vyas, the stellar star cast includes Maanvi Gagroo, Amol Parashar and Kunal Roy Kapoor. A quirky take on modern family relationships, the three siblings in the show have resonated deeply with the sensibilities of the young audience. Season 2 takes that story further, with a new twist in the tale.

Speaking about the show, Sameer Saxena, Chief Content Officer and Head – TVF Originals said, “We received an overwhelming response for the first season of Tripling and that compelled us to return with the show second time around. Today, Tripling is one of the most memorable series in the digital space that strongly resonates with our audience with strong characters, fun moments in a modern Indian family; we wanted to utilize that aspect and weave into it the core ethos of Drivezy. We took our time to bring out season 2, as we wanted to give the comprehensive approach to the series a serious thought. Along with TVFPlay, Tripling will also be streamed simultaneously on SonyLIV – which is further proof of the strength of Tripling’s impact on youth culture. We are certainly excited and looking forward to take the audience on another riveting journey with the popular trio.”

Commenting on the collaboration, Ashwarya Singh, CEO and Co-Founder – Drivezy said, “We are extremely pleased to be associated with ‘The Viral Fever’ to kick off our marketing efforts to cover the digital landscape, work with social influencers and promote on the go video experience. Being a travel and transportation platform, we want to enable our customers to move towards consuming content online and on the move. Our customer demographics have varied culture, geographies and languages and TVF is a platform that appeals not only to the urban audiences but to viewers across the nation. Drivezy aims to provide a culturally relevant and truly Indian travel and entertainment platform for the country’s evolving digital users who are frequently travelling.”

Talking about the association, Amogh Dusad, Head – Content, Partnerships and New Initiatives, Digital, Sony Pictures Networks India said, “With more than 350 Mn online video viewers, these are exciting times for digital video content in India. At Sony LIV, we have ambitious plans to expand our content offerings in the coming months. Partnership with TVF to stream Tripling season 2 on Sony LIV is the first step towards that direction. We intend to work with the best digital content creators in the industry and offer unique & remarkable stories to viewers. Tripling season 1 resonated well with the viewers and I am sure Sony LIV users will enjoy the latest season of Tripling as well.”

Watch the trailer of TVF Tripling Season 2 With Drivezy : here