U Cypher With MTV: A Stunning Finale Concludes With Team Yakshas 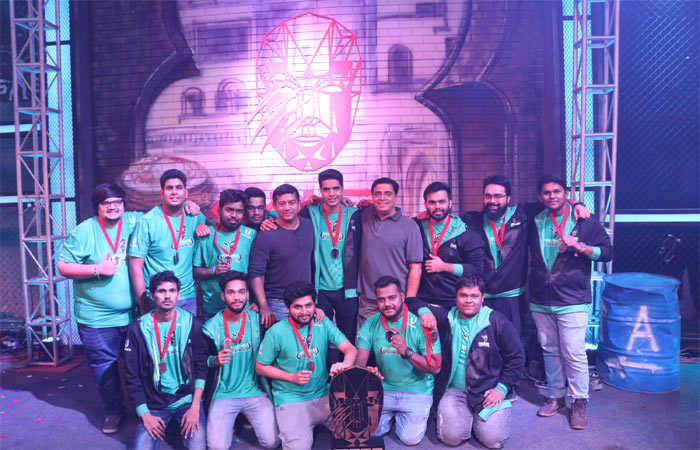 Boosting the E-Sports scene in India, the intense, gruelling 34-day U Cypher championship finally ended with team Yakshas bagging top honours. They defeated the Sherdils in a thrilling match that went into overtime,a befitting season finale. Kicked off as an intense month-long championshiponIndia’s No. 1 youth brand, MTV, U Cypher finale was a special 90-minute episode that witnessed the two teams battle it out to a cliff-hanger finish. Team Yakshas emerged as the ‘Naye Superstars’ of virtual gaming and were crowned U Cypher with MTV Champions for the debut season.

The finale started off with an easy win in Tekken 7 for Hans from Sherdils, who has remained undefeated throughout the tournament. The next game, CS:GO, was also won by team Sherdils to bring their score to 8 points, half-way through the match. The Yakshas upped their game soon after to pick up wins in both DOTA 2 as well as Real Cricket 17, bringing the match to a tie. The tie-breaker toss went in favour of the Sherdils who chose CS:GO as the decider game. Relentless focus and shrewd strategizing from the Yakshas saw them win the match in the third overtime 22-18, to be crowned U Cypher Season 1 Champions.

The first season of U Cypher saw some incredibly talented players, as well as great team-work across all teams. Hans bagged the Most Valuable Player of the championship. Shubham More won 9 out of 10 games in Real Cricket 17, both teams Yakshas and Yodhaswon 7 out of 10 DOTA 2 matches, while Akramaks won 8 out of 10 CS: GO matches played in the tournament.

In the overall standings, Yakshas and Sherdils were followed by the Marksmen and Akramaks in third and fourth place respectively.

Vivek “Acrid” Gore, the winning team Yakshas’ Captain, says “It’s a dream come true to win one of the biggest E-Sports tournaments in India. U Cypher has been a life-altering moment for all of us. The championship was very well organized and felt like an international tournament. The key moments for Yakshas were working on strategies together, practising and making new friends for life. We were focused and had only one aim right from the beginning, to become the champions for the first ever season. I look forward to being back in the next season.”

Ronnie Screwvala, Founder, U Sports comments “I would like to congratulate Team Yakshas who constantly proved themselves to arise the reigning champions that they are today. Also, a word of appreciation for the other teams who put up an amazing fight till the very end. They may have lost the tournament but have won all our hearts with their skill, passion and determination. Our endeavour was to give talented young E-Sports athletes an audience with the country and raise awareness for E-Sports to be recognized as a sports discipline. U Cypher in its first season itself met with great interest across the country and made the world take notice. Hope the fans enjoyed the series.”

Commenting on the conclusion of the show, Ferzad Palia Head – Youth, Music and English Entertainment, Viacom18 said,“Pulling off a totally new genre on television was a big challenge for us but the kind of response we have garnered for a first of its kind, multi-platform, multi-game E-Sports championship is beyond anything we ever imagined! Over the past one month, U Cypher with MTV has changed the E-Sports scenario in India. The overwhelming response has assured us that India is ready for such format, and we hope to continue bringing such cluster breaking content to our viewers. As we close the first season of the show, we would not only like to congratulate Team Yakshas for a fantastic win, but also the other teams who have contributed in the overall success of the season.”

Supratik Sen, Co-founder and CEO, U Sports says “The highly competitive nature and high-speed spectacle of the sport made U Cypher a thrilling experience for players and viewers across the world. Our aim in introducing E-sports and positioning it as a new sport has garnered worthy traction from various places worldwide. Season one set the benchmark high with team Yakshas victory. My commendations to team Yakshas and all the player in the tournament. They are all E-sports Superstars. The viewers have perceived the show well and our inbox is flooded with requests to participate in the next season. We hope the nation had a great game with U Cypher season 1. We’ll be back soon with more on the next season.”

U Cypher as a championship has gathered momentum in India.It has laid the foundationto break the stereotype, thus changing the perception that was and that E-Sports in India is now becoming a long-term career prospect for gamers as it is internationally.The aspiration is to nurture the sport and motivate budding young gamers giving them a platform to showcase their talent and compete at the international level.

Tags:
Previous Article
Celebrate Holi With A Touch Of Tajness At The Iconic Grand Palaces Of Taj
Next Article
Mumbai to host Times Travel Show and Backpackers Summit 2018