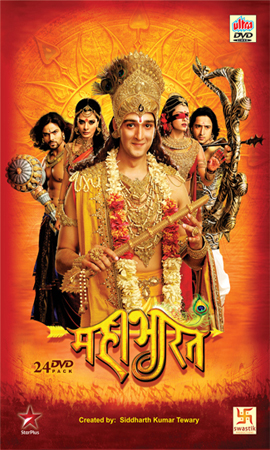 Ultra Group launched a 24 set DVD collection of “Mahabharat”- A Mythological Magnum Opus based on Sanskrit epic Mahabharata. Mahabharat was produced, marketed & telecasted on a scale and grandeur never before seen on Indian Television.
It was telecasted on 16th September 2013 from Monday to Friday at 8.30 pm in Star Plus channel. The show ran until 16th August 2014. It was an instant success from its very first episode itself & enjoyed a high TRP rating throughout its tenure Produced by Swastik Productions, it starred Saurabh Raj Jain as Krishna, Shaheer Sheikh as Arjun, Pooja Sharma as Draupadi, Arpit Ranka as Duryodhan, Aham Sharma as Karna and many others.
It has been amended in a very lucid story telling format, wherein every episode is continued by the other as its logical extension. This easy to watch, uninterrupted format makes it effortless for viewers to follow the entire journey seamlessly. To simplify it more the entire content is supported by English subtitles. The pack also contains a complimentary Bhagwadgita and 3D fridge magnet.
Key Highlights of TV Series:
Ultra Media & Entertainment Pvt Ltd is an entertainment conglomerate and a pioneer in providing home video solutions globally since the past 35 years. It always has been in forefront in providing entertainment of various genres to the worldwide audience. Be it mythology, history, drama, comedy, thriller, action etc, Ultra has brought them to your drawing room now since decades through its robust distribution network. Continuing its tradition of re living the rich, historical, mythological and well known Indian TV serials, Ultra in the past have successfully launched Ramayan, Devon Ka Dev Mahadev – Season 1 and 2, Jai Hanuman, The Sword of Tipu Sultan, Malgudi Days and many more globally.
The company also currently has an exhaustive library consisting of over 1500 titles comprising of blockbuster Indian Films, television serials and other contents and is associated with some of the leading production studios worldwide
The company also has got many offers for this DVD set of Mahabharat as Corporate Gifting, Merchandise and Institutional sales across various companies.
Tags:
Previous Article
Avon Unveils Little Black Dress Lace – Perfect Fragrance for Her!
Next Article
This summer, GIFT your family a holiday at EsselWorld!

This summer, GIFT your family a holiday at EsselWorld!
MediaInfoline May 02