Uma’s battle gets a head-start with Esho Bondhu 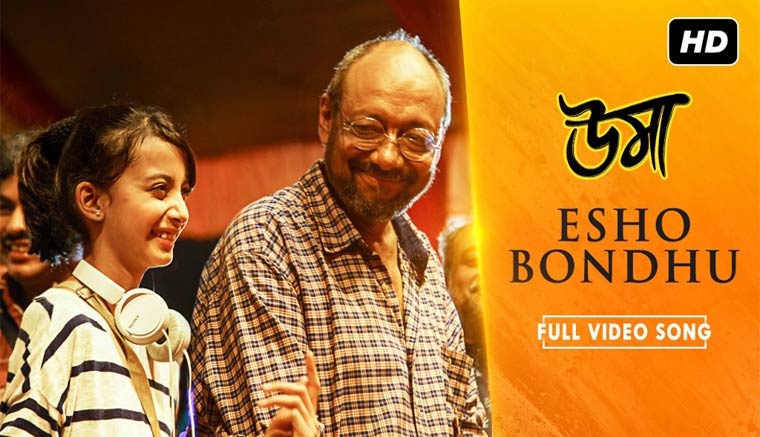 The 3rd song of SVF’s upcoming film Uma,  directed by Srijit Mukherji was launched last evening. The song has been aptly titled ‘Esho Bondhu‘ because of the significance of people coming together and joining hands as friends to achieve the mission of bringing smile on a little girl’s face.

Composed by Anupam Roy, the soul stirring number has been sung by famous duo Sidhu and Pota, from the Bengali band Cactus.

The entry scene of Anjan Dutt of the song Esho Bondhu, marks the spirit of the song – giving an exhilarating vibe to the audience. Mr Dutt plays a broken man (Brahmananda) who used to be a film director. His main mission which is portrayed through this song is to direct the entire “Aukal Bodhon” – a fake Durga Puja in Calcutta. This is all for a single father, Himadri (Jisshu U Sengupta) and his terminally ill 8 year old daughter, Uma (Sara Sengupta) who live in Switzerland, and the little girl wants to witness a Durga Puja celebration. However, due to her illness, there is a slim chance of her survival till October (when the festival takes place through a span of 5 days). Thus her father’s decision to culminate a fake festival to make his daughter’s dream come true. With the help of Brahmananda and his team (comprising of Rudranil Ghosh, Ambarish Bhattacharya, Apratim Chatterjee, etc), Himadri can go a step further to put a smile on Uma’s face. But there is a villain in every story, there is a “Mahishashur” who has to be destroyed by “Maa Durga” – here Anirban Bhattacharya and Babul Supriyo’s characters are seen being absolutely against the concept of having Durga Puja in April. They try in every possible way to end their mission. Will Himadri and Brahmananda win the battle? Will Uma see the climax in the way they planned it?

The director of Uma, Srijit Mukherji, went on to say – “I think very few songs can show a battle between the good and the bad side as clearly as Esho Bondhu does. This will even increase the anticipation of the audience about the film. The first two songs from Uma, Hariye Jawar Gaan and Aaloshyo, were trending at number 4 and number 7 respectively, on YouTube – waiting for the response from this one!”

The film is inspired from the true story of Evan Leversage, the Canadian boy suffering from cancer and for whom his village of St. George, Ontario came together to celebrate Christmas much ahead of the actual festival.

Listen to the song: here

TAGEntertainment Esho Bondhu Uma
Previous PostAmitabh Bachchan celebrates 102 Not Out with his fans and goes Badumbaaa! Next PostBurger King And Mumbai Indians Strengthen Their Partnership