Unravel the suspense thriller ‘Badla’ with the &pictures 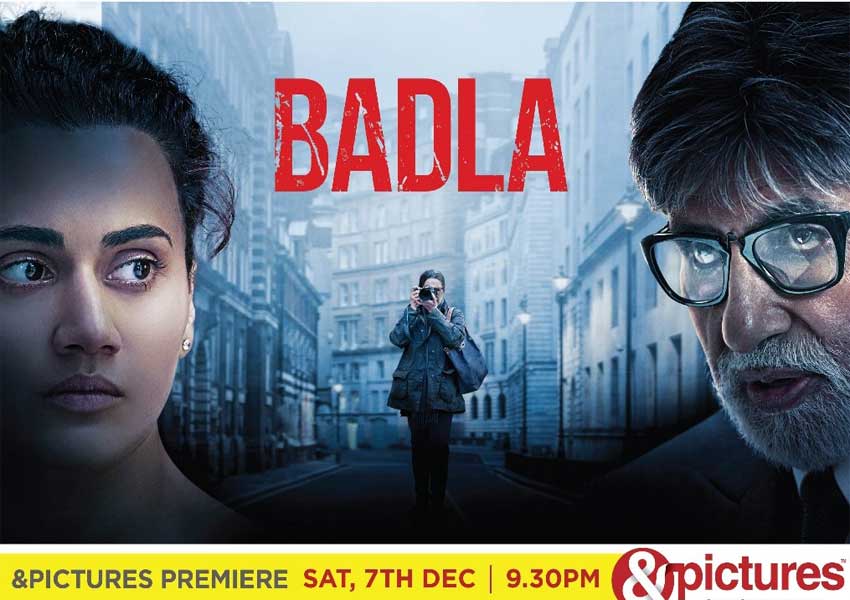 One room, a corpse and one suspect! 2019’s most watched suspense thriller ‘Badla’ pulls the loose threads of Naina Sethi’s (Taapsee Pannu) alibi, who is accused of murdering her lover and find herself stuck in maze of situation. Has Naina committed the crime? Or is she being framed by somebody? Director Sujoy Ghosh’s cleverly written plot lets the viewer think that they know what’s going on but shoots their expectations down with twists that makes them think whether Naina is innocent or guilty. Badla marks the reunion of the power packed actors Taapsee Pannu and Amitabh Bachchan as they will be seen in a victim and lawyer roles once again. Produced by Red Chillies Entertainment, the movie also features Amrita Singh, Manav Kaul and Tanveer Ghani in pivotal roles. Witness this suspense thriller with the &pictures premiere of ‘Badla’ on Saturday, 7th December at 9:30 pm.

Commenting on her character Naina in the movie, Taapsee Pannu said, “One of the biggest contributing factors for me to take the role was the way my character revealed the many layers of being a strong, self-made authoritative woman, who at the same time felt vulnerable. I love playing layered characters as it adds immensely to the plotline. Another highlight was the fact that this was the second time I was sharing screen space with Amitabh Bachchan-sir. I’d like to believe that Sujoy Sir saw a certain dynamic in us coming together again in the ‘lawyer and client relationship, and that gave the whole story so much more dimension. To sum it up, all I can say is that I have never done a film like this before in my career and I truly hope that the audience watches the film as it premieres on &pictures.”

Commenting on the plotline of the film, Director Sujoy Ghosh added, “Badla’s story is basically like two people making chess move, where someone is telling the story, and somebody is making the counter story. To give the movie an added connect I referred to three books that I love: the Mahabharata, the Gita and the Ramayana. There is so much about life to learn in these books. So, I thought it would be a great way to play it in this story. For example, what is revenge and what does it stand for? When is it right to take revenge? I wanted that in my film, and it comes beautifully from Mahabharata.”

Set against the backdrop of Glasgow’s icy air, the narrative follows a couple – Naina and Arjun (Tony Luke) who are having an extra marital affair are waiting in a hotel room for the blackmailer with a big filled with 100,000 pounds. Suddenly, Naina is hit by something due to which she lands up losing her consciousness. On regaining her senses after a few hours, she finds herself locked up in a room with a corpse drenched in blood and the police outside trying to break in. The plot then traces the life of Naina Sethi, a strong and self-made woman, who is under house arrest as she is accused of murdering her lover. A top-rated lawyer, Badal Gupta (Amitabh Bachchan), is hired by Naina’s team, to prove her innocence in what seems like an open-and-shut case. As the interrogation begins, he repeatedly tells Naina “Pay attention to the details. The answer is in the details”. A man with a track record of winning every case in 40 years of his career, Badal is hell bent on winning this case and unravelling the truth. But he has only three hours to uncover the facts and prove Naina’s innocence.

As the story proceeds, the viewers will be posed with many questions like what exactly is Naina’s story? Who killed the man? Why was she at the hotel? Is she telling the truth?

To find out watch the &pictures premiere of 2019’s most watched suspense thriller Badla on Saturday, 7th December at 9:30 PM

Tags:
Previous Article
Amazon Prime & Excel Media return with an all-new season of Inside Edge
Next Article
Akshay Kumar’s GOLD is ready to strike a goal in China