Veerey and Geet share an amazing chemistry off screen as well 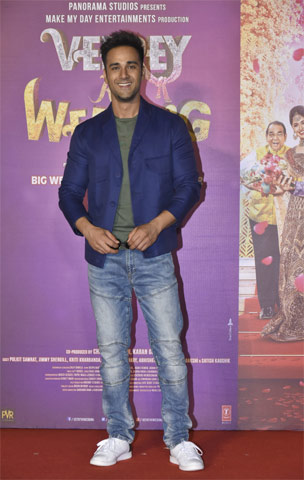 The lead actors of the upcoming family entertainer Veerey Ki Wedding, Pulkit Samrat (Veerey) and Kriti Kharbanda (Geet) have already given a glimpse of their sizzling on screen chemistry to the audience after the launch of the trailer recently. The duo shares an undeniably amazing equation not only on screen but off screen as well. They will be seen opposite each other for the first time in Veerey Ki Wedding.

The audience is already in love with the duo and are eagerly waiting to see them together in the film.

According to the actors, they first bonded on their common love for food on the sets.  Being true blue Punjabis, the actors share a passion for food and are always found sharing a bite of scrumptious snacks during breaks and in between shots as well!  They compliment each other very well on and off screen as well.

Both Kriti and Pulkit say that they signed the movie just because the other was being cast opposite them and have also said that they will surely be excited to work with each other in the future as well.

Make My Day Entertainments, A Panorama Studios release, Veerey Ki Wedding is produced by Rajat Bakshi, Parmod Gomber and co-produced by Chandan Bakshi and Karan Gomber. The movie is all set to hit the theaters this Holi, on 2nd March.