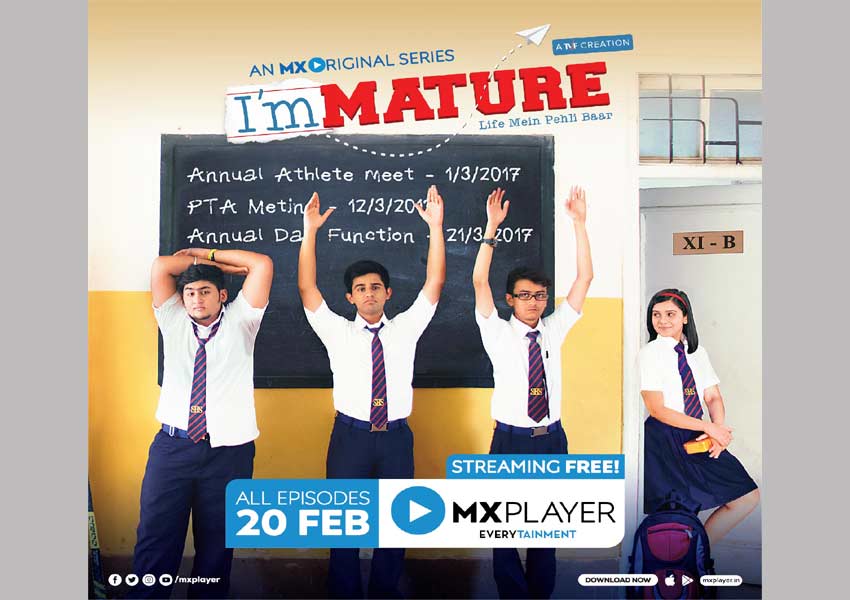 The Viral Fever (TVF) will now extend its footprint to provide content across different platforms, kick-starting with An MX Original Series – ImMature. This endearing series will stream for free, starting 20th February on MX Player, the world’s largest local video player and a leading streaming platform. With a thriving community of fans across India, TVF has built a repute for having a finger on the pulse of what moves the Indian audience. After gaining critical acclaim and audience appreciation for unique and viral content across key channels, Girliyapa, The Timeliners, The Screen Patti and TVF Qtiyapa, TVF will now not only create content for its own service TVFPlay, but will also partner with independent VoD Services to grow the ecosystem.

ImMature, a 5-episode coming-of-age series, has been created by TVF’s Chief Content Officer Sameer Saxena, directed by Prem Mistry and written by Abhishek Yadav, Suprith Kundar and Nishaad Javeri. ImMature earned critical acclaim when it became India’s first-ever and only series to be nominated for CanneSeries (Top 10 Web-Series) at the prestigious Cannes International Series Festival 2018. The series revolves around the life of a 16-year old Dhruv, who is eagerly waiting to experience everything that adulthood has to offer. The show tackles poignant moments of growing up with sensitivity, while adding a touch of humour to the typical dilemmas of a teenage boy.

Karan Chaudhry, President and COO – The Viral Fever, “At TVF, our focus is to create innovative and memorable content that resonates with our audiences. ImMature already created ripples last year by being the first Indian show to be nominated at the CanneSeries and I’m certain that once launched on MX Player, people will enjoy the show as much as we enjoyed making it.”

Speaking about the association, Karan Bedi – CEO, MX Player said, “Catering to a wide base of over 75 million daily active users, our aim is to offer viewers engaging content that cuts through the noise. Our association with TVF adds a different flavor to our existing slate of original programming, thereby creating entertainment choices for every palette on our platform.”

ImMature also marks the best of what TVF has to offer, both, in terms of cast and creators. The series stars Omkar Kulkarni, Rashmi Agdekar, Chinmay Chandraunshuh, Vissesh Tiwari along with popular personalities, Jitendra Kumar, Nidhi Bisht, Sameer Saxena, Nidhi Singh, Badri Chavan and Anandeshwar Dwivedi. The original series will also have 8 sound tracks created keeping the premise and emotions of the show, composed by TVF’s Vaibhav Bundhoo.

Experience the many firsts in Dhruv’s life with An MX Player Original ImMature, a TVF Creation; watch the trailer: here