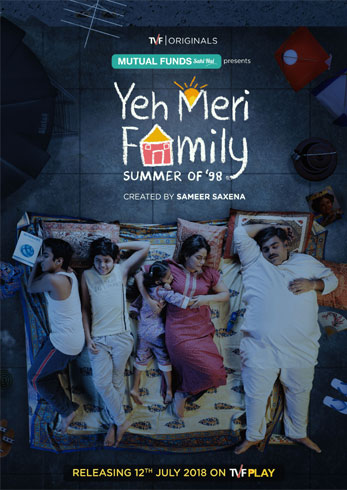 The Viral Fever (TVF) has announced its second partnership with Association of Mutual Funds in India (AMFI) for its upcoming dramedy web series ‘Yeh Meri Family’. Starring Mona Singh and Akarsh Khurana playing the roles of the affable parents, the show will surely help 90s kids get a nostalgia fix. TVF had previously partnered with AMFI for the second season of The Timeliners’ super-hit web series ‘The Aam Aadmi Family’ which has garnered 25 million views till date.
Set in Jaipur over the events of the summer vacation of 1998, Yeh Meri Family, the 7-episode series revolves around the simplicity in conflicts, emotions and bonding of the five-member Gupta family. The protagonist – 12-year old street-smart Harshu (Vishesh Bansal), 15-year old adarsh beta Dabbu (Ahaan Nirban), 5-year old Chitti (Ruhi Khan) – the apple of the family’s eye, the quintessential 90s mom – Mummy (Mona Singh) and the engine of the family – Papa (Akarsh Khurana) – each character lends a beautiful hue to the family dramedy.
Created and directed by Sameer Saxena (also the creator of Permanent Roommates & Tripling) and written by Saurabh Khanna (Creative Director for Permanent Roommates S2), the musical notes for the series have been strung together by TVF’s ace music director Vaibhav Bundhoo (TVF Pitchers, Permanent Roommates, Humorously Yours and ImMATURE –yet unreleased, official selection at Canneseries, April 2018). Singing legend Udit Narayan has lent his voice to one of the tracks of the show.
Sameer Saxena, TVF’s Chief Content Officer and Head – TVF Originals said, “Yeh Meri Family is one of our biggest original web series till date and something that the TVF team is really excited about. We have put a lot of heart and soul in this show for the content to resonate with viewers. Set in the 90s and peppered with incidents that will make everyone smile and fondly remember their days gone by, along with characters that every single person can relate to, the show will have a universal appeal. It can and should be watched with the entire family. In the past, TVF gave a new direction to web entertainment with Pitchers, reinvented romantic comedies for India with Permanent Roommates, and gave road trips a new turn with Tripling. Now, with Yeh Meri Family, we intend to give a whole new dimension to family shows.”
Vijay Koshy, Head – Brand Partnerships, TVF, said, “It takes immense courage and belief in our creative product to create a family based show, set in the late 90s. At the very onset we knew that this show is meant for brands that embody family values like Trust, stability and the innate strength of enduring relationship. Kudos to the team at AMFI for believing in us and partnering with the TVF family on YMF”
NS Venkatesh, Chief Executive, Association of Mutual Funds in India (AMFI) commented, “TVF’s web series, The Aam Aadmi Family, was the first time AMFI partnered with a web series for investor education. The show performed very well for our objective and helped in creating awareness about mutual funds amongst the viewers who follow the web series. With ‘Yeh Meri Family’, we hope to recreate the same impact and reinforce the key message of “Mutual Fund Sahi Hai”. With the father in the new series being a Mutual Fund proponent, makes it an even better fit to drive home the desired message for investor education in respect of mutual funds. We are excited to partner with TVF again.”
Vyom Charaya – Director, Brand Solutions, said, “Yeh Meri Family is a back-to-our-roots story told straight from TVF’s heart. Set in the late 90s, the show explores the sensibilities of a quintessential Indian family as seen from the eyes of a 12-year old boy. Every episode explores how the strong Indian family relationships are formed as the boy grows to adulthood. The affable father, played by Akarsh Khurana, runs a financial services business and is shown as a strong advocate of long-term investment in mutual funds making the story a great fit for our partners, Association of Mutual Funds in India (AMFI), as part of their ‘Mutual Fund Sahi Hai’ campaign. With its potent mix of nostalgia and coming of age, we are sure the show will strike a chord with the 90s kids, an audience that is prime for mutual funds investments in 2018.”
Tune in to watch Harshu learn to love his family on 12th July. The web series will release on TVF’s YouTube channel and TVF Play simultaneously, with new episodes releasing weekly.
Stay tuned to The Viral Fever (TVF) for further updates on ‘Yeh Meri Family’