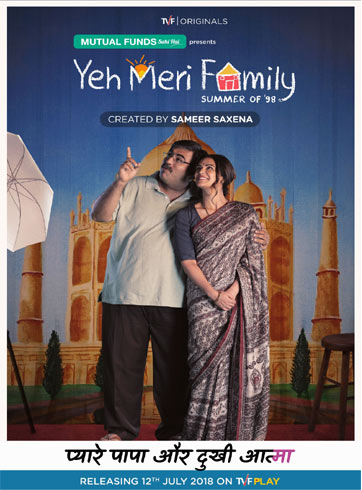 Remember those days when the park and not our mobile phones used to be our playground, when we gifted mix tapes to our school crush and when a trip to the local bazaar used to be our weekend getaway? The Viral Fever (TVF) has just launched the trailer for its upcoming dramedy, a 7-episode web series ‘Yeh Meri Family’, which will revive all those memories, and more. The trailer aptly captures the nostalgia of the 90s and displays the dynamics of the Gupta family from Jaipur. Created in partnership with AMFI (Association of Mutual Funds of India), the show portrays relationship dynamics in a way that is bound to resonate with viewers, as they emanate not from vivid imagination but from true accounts.
The trailer of ‘Yeh Meri Family’ can be viewed at https://youtu.be/-8RHxGQy7H8.
Starring Mona Singh and Akarsh Khurana playing the roles of the loving parents who hold the family-fort every step of the way, Yeh Meri Family has been created and directed by Sameer Saxena (also the creator of Permanent Roommates & Tripling). Words mean the world at TVF, and writer Saurabh Khanna
(Creative Director for Permanent Roommates S2) has displayed his craft beautifully with Yeh Meri Family. With melodies by TVF’s ace music director Vaibhav Bundhoo, who has given music for TVF Pitchers, Permanent Roommates, Humorously Yours and ImMATURE (yet unreleased, official selection at Canneseries, April 2018), one of the tracks in the show has been sung by singing legend Udit Narayan.
Each episode of the series, which starts streaming on 12th July, is focused on a particular character in the family and showcases the role of that person; be it Papa, Mummy, Harshu, Dabbu or Chitti. The affable simplicity of the conflict, narrative and emotions is what makes this series tug at heartstrings. It can be watched with as much ease on a big screen, along with whole family, as on a secluded laptop screen.
‘Yeh Meri Family’ starts streaming on 12th July on TVF Play app and website.