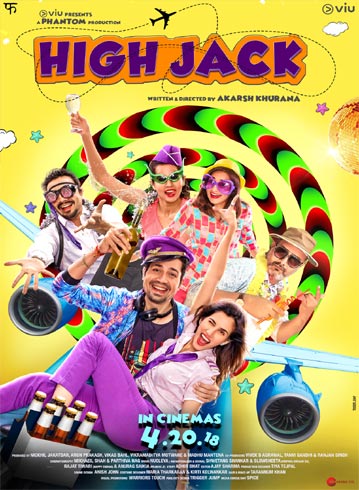 The premium video-on-demand service Viu, by Vuclip and PCCW, is teaming up with Bollywood’s ace production house Phantom Films to produce their upcoming movie HIGH JACK, further fortifying its strength as a pioneer in original content. Adding to its repertoire of insights driven content, Viu is taking the plunge into Bollywood. Today’s news is another step in the direction of its brand philosophy to create compelling and engaging content for millennials.

Directed by Akarsh Khurana, the film will feature digital sensation Sumeet Vyas, Pyaar ka Punchnama fame Sonnalli Seygall, RJ Mantra, Kumud Mishra along with Nipun Dharmadhikari and Amey Wagh. The story of HIGH JACK is about a group of first time hijackers who get themselves into hilarious situations, following a comedy of errors. The plot takes interesting twists and turns and is interspersed with new age screwball comedy. The film is slated to hit cinemas on the 20th of April.

Vishal Maheshwari, Country Head- Viu India said, “Being in the content creation business, Viu is focused on innovating and providing an enriched experience for its Viu-ers. With the evolution of OTT and consumers’ tastes, quality content rules and that’s why collaborating on a film like HIGH JACK is apt for us. Like Viu, Phantom Films is known for exceptional audience experiences, and it gives us great pleasure to partner with them. This film is another step towards showcasing the best content on our platform.”

Says Madhu Mantena, Producer, Phantom Films, “Associating with Viu gives us great insight into the online content watching audience’s mindset, and thus we partnered with them on HIGH JACK, which brings some of the best web content talent together for the first time. It’s been a great experience, and we are confident that the audience will love this madcap film.”