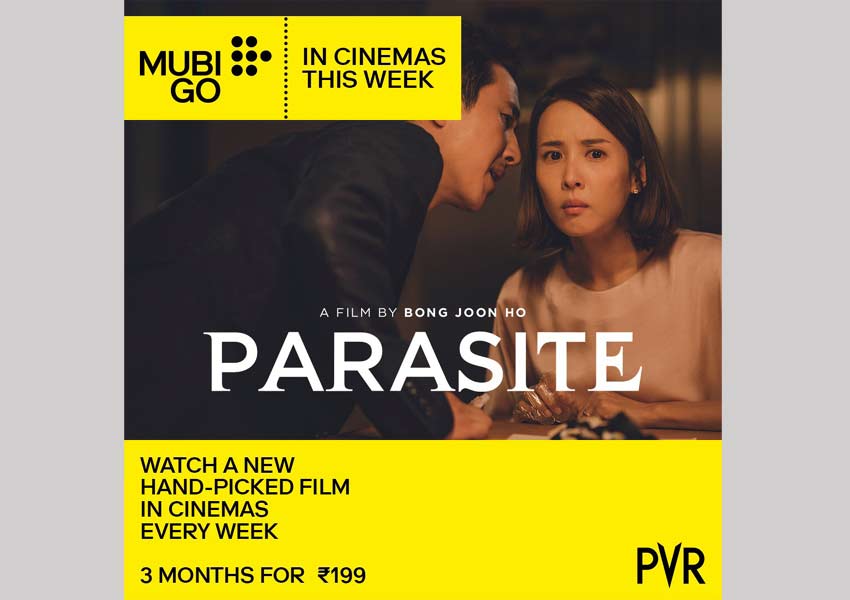 For a week starting January 31, subscribers of the curated streaming service MUBI, can watch the critically-acclaimed film PARASITE at any PVR theatre through the MUBI GO app. The black comedy, directed by Bong Joon-Ho, has received six Oscar nominations and is the only South Korean film to win the Palme d’Or at the 2019 Cannes Film Festival.

PARASITE tells the story of Kim Ki-teak’s (Song Kang-ho) unemployed family who are living in a squalid basement. When his son gets a tutoring job at the lavish home of the Park family, the Kim family’s luck changes, and one by one they gradually infiltrate the wealthy Park’s home, attempting to take over their affluent lifestyle. Included in a MUBI subscription, MUBI GO users receive one complimentary PVR cinema ticket every week for a film hand-picked by MUBI. Previous MUBI GO films have included the award-winning KNIVES OUT, starring Daniel Craig’ and Sam Mendes’ Oscar nominated war saga 1917. Existing MUBI users can find MUBI GO included in their current subscriptions and new members can subscribe to MUBI for an introductory price of Rs 199 for three months.

Bong Joon-Ho has dazzled audiences with his unique knack for blending genres to tell layered, one-of-a-kind stories through films like OKJA and SNOWPIERCER. PARASITE has received 161 wins and 198 nominations across a variety of prestigious awards. For the 92nd Academy Awards, the film’s nominations including Best Picture, Best Director and Best International Feature Film. At the 77th Golden Globe Awards, the film won the award for Best Foreign Language Film. It received four nominations at the 73rd British Academy Film Awards. It also became the first non-English film to win the Screen Actors Guild Award for Outstanding Performance by a Cast in a Motion Picture.

What to Watch: Parasite

Where: Book it any PVR cinema via the MUBI GO app