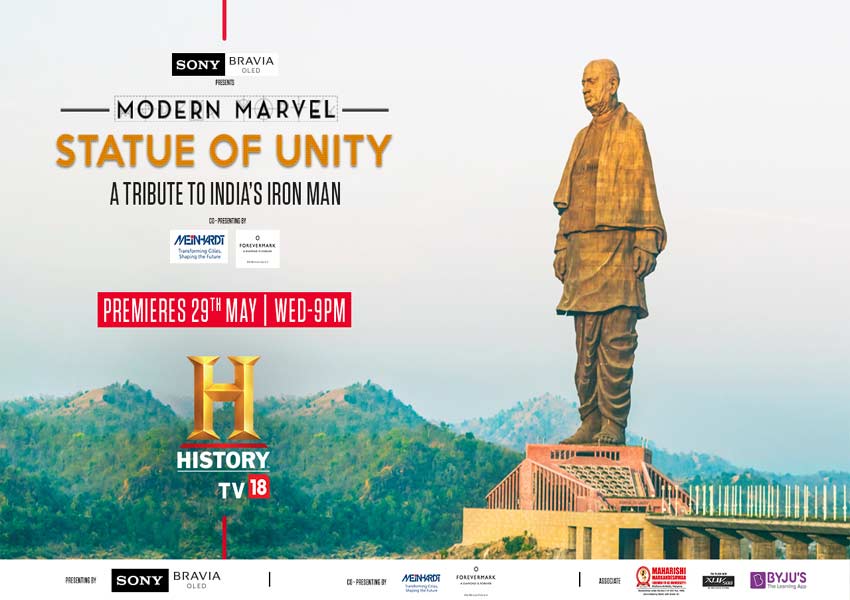 Did you know that the Statue of Unity is almost twice the height of the Statue of Liberty? And that it took just 42 months to make this implausible idea come to life? Discover these and other interesting facts about the iconic structure on HISTORY TV18’s ‘Modern Marvel: Statue of Unity’ premiering 29th May, 9 PM.

The Statue of Unity stands on the island of Sadhu Bet on the river Narmada, in Gujarat. It honors Sardar Vallabh bhai Patel, a prominent figure in the history of modern India. The freedom fighter, often referred to as India’s Iron Man, was instrumental in unifying the country as the imperial British rule prepared to relinquish control.

The exclusive documentary focuses on how the Statue of Unity came to be. It’s a story of unprecedented collaboration, between a construction giant, an artist, experts and other contributors across India and even overseas. For the renowned artist and Padma Bhushan awardee, Ram Vanji Sutar, known for his statues of Indian leaders, the Statue of Unity was a challenge like no other.  The project needed the coming together of many disciplines – art, architecture and engineering. The documentary highlights the challenges at crucial points of the project and how these were overcome, to create a 21st century wonder, in record time.

Viewers will see the Statue of Unity come to life ground up and piece-by-piece as never before. Exclusive footage of the site and the build, interspersed with expert interviews of the construction team and eminent others give an in-depth account about what it took to build the world’s tallest statue.

The documentary also showcases some staggering statistics about cost, size and tonnage as well as the complexities of casting and cladding an enormous structure in bronze. It is also a tribute to the gargantuan efforts of thousands of people, who worked day and night to get the Statue standing on the island on the river Narmada, in Gujarat.