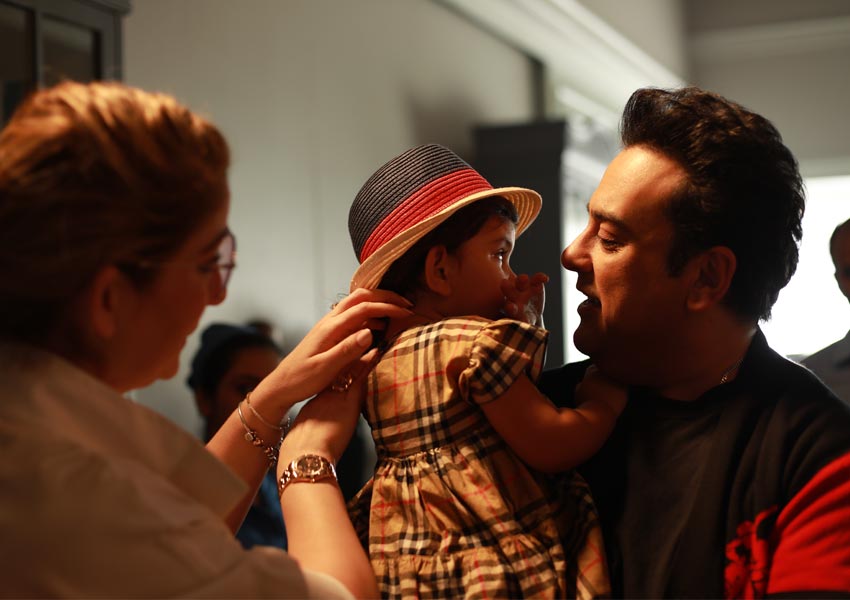 Now that Adnan Sami is back with his latest single Tu Yaad Aya, there is no stopping the love and the appreciation that the Padma Shri winner is being showered upon by his fans in India and abroad.

While the views continue to multiply at a frenetic pace, we will let you in on a cute incident that happened during the shoot of Tu Yaad Aya produced and presented by Bhushan Kumar’s T-Series. By now, everyone who has seen and heard the melodious track which has music and lyrics by Kunaal Verma, will be aware that there is an intense part in the video where Adnan can be seen wiping his tears.

Interestingly, Adnan’s daughter Medina, who had never been to a film shoot before visited him on the set of Tu Yaad Aya, accompanied by his wife Roya.

While it may seem natural to think that the little kid would be amazed to witness this new world of arc lights, the reality was slightly different, something none on the set would have second-guessed. After a little while, Adnan’s two-and-half-year-old daughter started sobbing.  Adnan, his wife and the entire set were caught unaware at the turn of events and were puzzled by the little girl’s untimely tears. When Adnan coaxed her, ‘Why are you crying?’ she mumbled, ‘I am crying because my Baba is crying.’

The little girl’s parents tried their best to pacify her, assuring her that everything is fine and that her father’s tears were far from real and were meant only for the camera and flowed strictly on the instructions of video director Arvindr Khaira.

Little children can surprise you when you least expect it. Two-and-half years-old Medina could hardly fathom the difference between “action” and “cut” and her dad’s moist eyes in between. So Medina’s tears didn’t stop but the shoot came to a halt. Resuming the shoot became a challenge for the crew. Adnan laughs at the incident now and says, “Finally, my wife had to take her away from the location so that we could continue the shoot.”

Adnan adds, “My daughter loves the song. She has heard the audio many times. She tries to sing it. She is not able to say Tu Yaad Aya legibly but she says Tu Ya Ya. Now that she is aware of the video, she insists on seeing the video and cries every time she reaches that sensitive point. Then recently, I sat with her while watching the video and she still breaks into tears and we are like, ‘Medina, why are you crying now? She says, “I am crying because I was not there with you when you were crying Baba.’ So I was like, “I am there with you now. So be happy.”

This incident proves that a person is a person, no matter how small. Adnan signs off, “Kids say the darnest thing sometimes. Medina now demands to see the video but we avoid showing it to her. It’s one of the most adorable and memorable moments of Tu Yaad Aya for me.”