Witness an Indian wedding turning into an intriguing cross-border drama 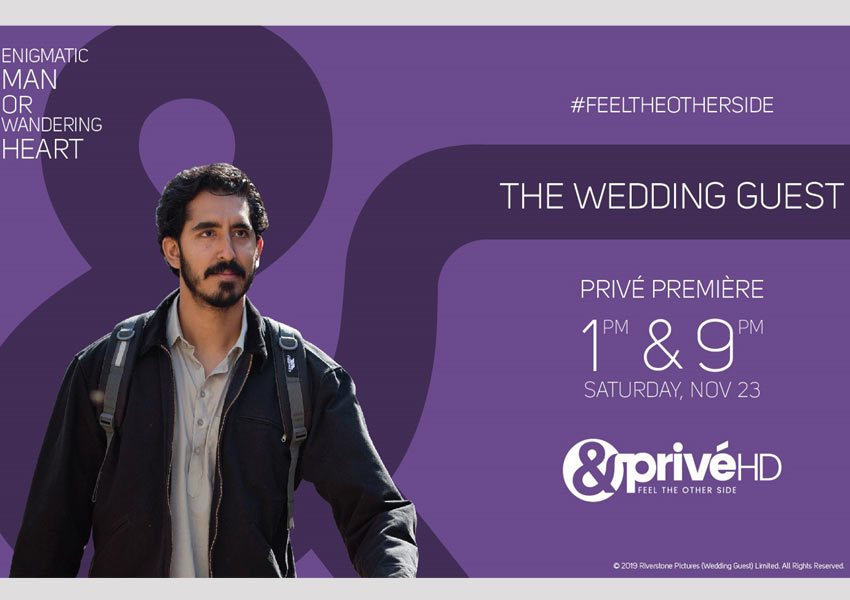 An enigmatic man on a mission or a vulnerable wandering heart? A woman desperate to break free or a cluttered mind, full of uncertainties? For the first time in India, straight to your television screens, witness a globetrotting drama of two souls on a quest, as &PrivéHD premieres ‘The Wedding Guest’. Available with the Zee Prime English HD Pack, the channel will air this cutting-edge thriller on Saturday, November 23, 2019 at 1 PM and 9 PM. This unconventional Indian wedding diary features Academy Award Nominee Dev Patel as Jay – the stoic and mysterious kidnapper-turned-protector and Emmy Awards Nominee Radhika Apte as Samira – the troubled bride-to-be, along with the talented actor Jim Sarbh in lead roles. Directed by the acclaimed filmmaker Michael Winterbottom, the film traces a breathless tour through the shadowy underworlds and hidden realms of Pakistan and India.

The film revolves around Jay, a man with a secret who travels from Britain to Pakistan to attend a wedding – armed with duct tape, a shotgun, and a plan to kidnap the bride-to-be – Samira. The plot quickly spirals out of control, sending Jay and his hostage on the run across the border and through the railway stations, back alleys, and black markets of New Delhi. As new attractions simmer, loyalties shift, and explosive secrets are revealed, the film unfolds the many layers beneath the surface as Jay and Samira come to terms with their grim realities. Pulsating with the sights and sounds of the Indian subcontinent, The Wedding Guest conjures a colourful world where danger lurks at every turn and nothing is as it seems.

Will Jay succeed in his mission or is there more to the story than what meets the eye?

Traverse the landscapes between India and Pakistan, and witness an interplay of love, crime and drama, as &PrivéHD premieres ‘The Wedding Guest’, this Saturday, November 23, 2019 at 1 PM and 9 PM.