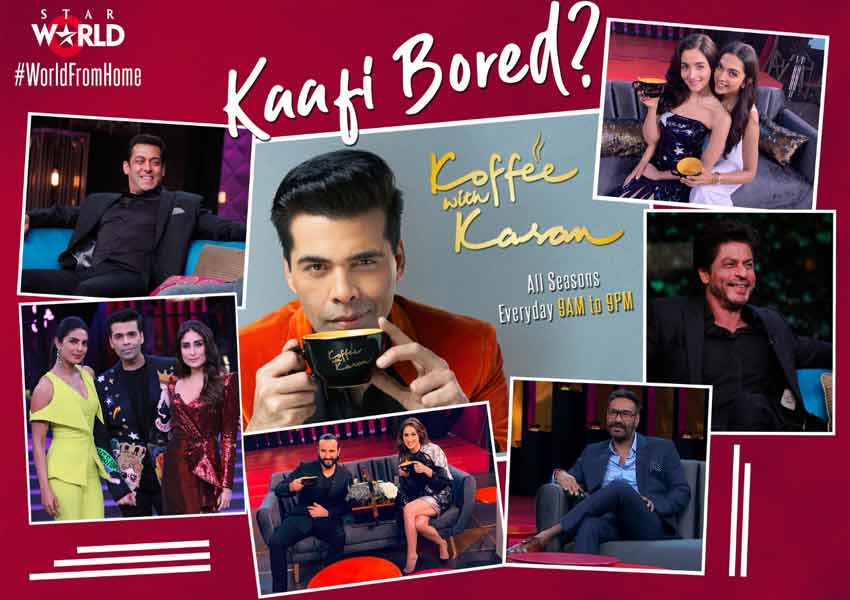 One of India’s longest running Bollywood talk show in India – Koffee with Karan, Star World is set to bring back the Bollywood explosion by airing once again, episodes from all seasons of Koffee with Karan. With Star World’s initiative World from Home, the channel urges people to stay home, stay safe, and while at it, binge-watch back-to-back episodes of the most loved Bollywood chat show, starting today till 12th April, every day from 9AM to 9PM!

So stay home, grab some pop-corn, while you go on a TV spree with your favorite B-Town talk show with no interruption.

Setting your spirits high during such stressful times, with Star World’s initiative World from Home, this iconic show – Koffee with Karan will spice up your daily quarantine routine. For fifteen years, Koffee with Karan has given all Bollywood fans a peak into the interesting lives of all the leading ladies and gentlemen of the Bollywood industry. With host Karan Johar’s unmatched style and personal connects with his colleagues, the show gave actors and actresses a platform to bare their souls and unwind on the koffee couch. Watch SRK’s effortless charm get better every season. Witness Desi girl Priyanka Chopra’s journey into becoming an international superstar, or check out Alia Bhatt fight her fight since her show debut goof-up, and become a high performing and diverse actress.

With the usual tricks up Karan’s sleeve, inquiring inquisitively about the Bollywood star’s personal lives, who’s seeing who, who hates who, and playing some fun games with celebrities, lighten up your mood while you’re quarantining, and binge watch the re-runs of Koffee with Karan, starting today till the end of the week, from 9AM to 9PM only on Star World.