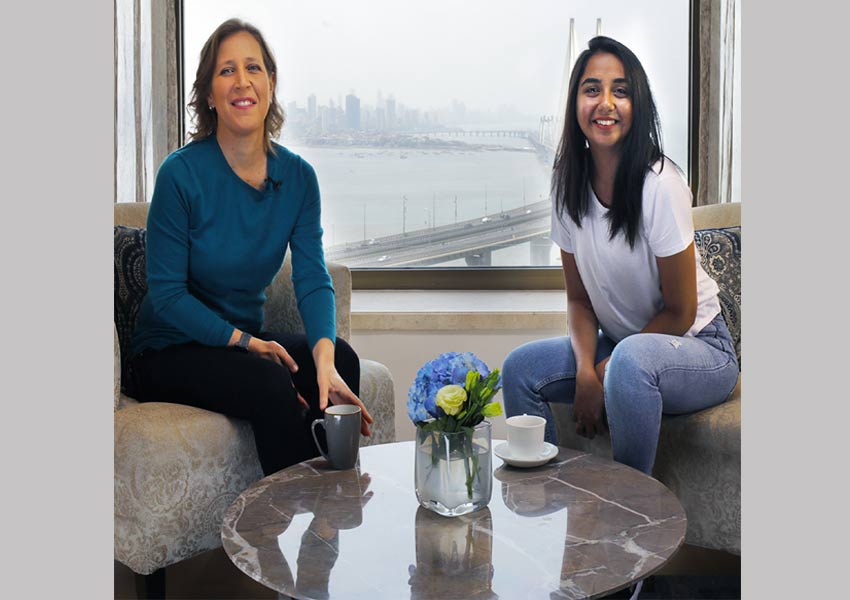 Prajakta being the first creator in the world to ever host Susan in an exclusive tete-a-tete for her #RealTalkTuesday series, the two feisty women discussed everything from the inception of the Google Headquarters  in the basement of Susan’s apartment to the journey of YouTube so far and the plans ahead for the creators and the audiences alike. This rendezvous between two such notably influential women is sure to give the audience and the creator community an insightful understanding into the intricacies of YouTube’s stratagems. Prajakta also spoke to Susan about some interesting anecdotes pertaining to Susan’s early life in India before she went on to become one of the most powerful women of the world today.

Speaking about the experience, Prajakta says, “My favourite part about my job is that I get to have conversations with such amazing, inspiring people and Susan tops the list! She is warm, funny, humble and so welcoming. We had chai and spoke about the platform before we actually began shoot the episode. We spoke about everything from the inception of Google in her garage to weird video content we both binge watch on YouTube. Overall, such a fulfilling and satisfying conversation. So much to learn!”

Susan on the other hand who immediately took a liking towards Prajakta, was all praises about her. Apart from citing Prajakta’s YouTube career graph as a successful case study at Brandcast, Susan also personally applauded and congratulated her for achieving a lot at such a young age.

Since January this year, Prajakta has bagged several prestigious awards like ‘Youtuber of the Year 2019’ by Cosmpolitan India, Forbes India ‘30 under 30 2019’, Entrepreneur India ‘35 under 35 2019’, Most Powerful Influencer on Digital at Digixx 2019 and Outlook Business ‘India Women of Worth ‘alongside names like Alia Bhatt, Shikhar Dhawan, Tapsee Pannu, Kanika Goyal, Hima Das, Vijay Deverakonda and so many others.

An ingenious digital creator with close to 6 million followers, One Digital Entertainment’s home-grown talent Prajakta has been working relentlessly over the years and has created a digital legacy with millions of fans being inspired by her content. Recently, she collaborated with the biggest creator and the first woman ever to be hosting NBC’s Late Night Show, Lilly Singh a.k.a Superwoman. She was the only one to be invited by Marvel India to collaborate with the cast of Captain Marvel – the Oscar winning actor Brie Larson and the legendary Samuel Jackson. She has also teamed up with Bollywood artists like Kareena Kapoor, Ali Bhatt, Varun Dhawan, Vicky Kaushal, John Abraham, Saif Ali Khan, Badshah, Raftaar, Kajol, Ayushmann Khurana amongst many others. Prajakta was one of the 4 global creators to represent India, invited by the UN at their New York headquarters to deliver a speech on xenophobia, racism and hate speech to over 1000 high school students and the UN officials present there, on International Tolerance Day in November 2018.