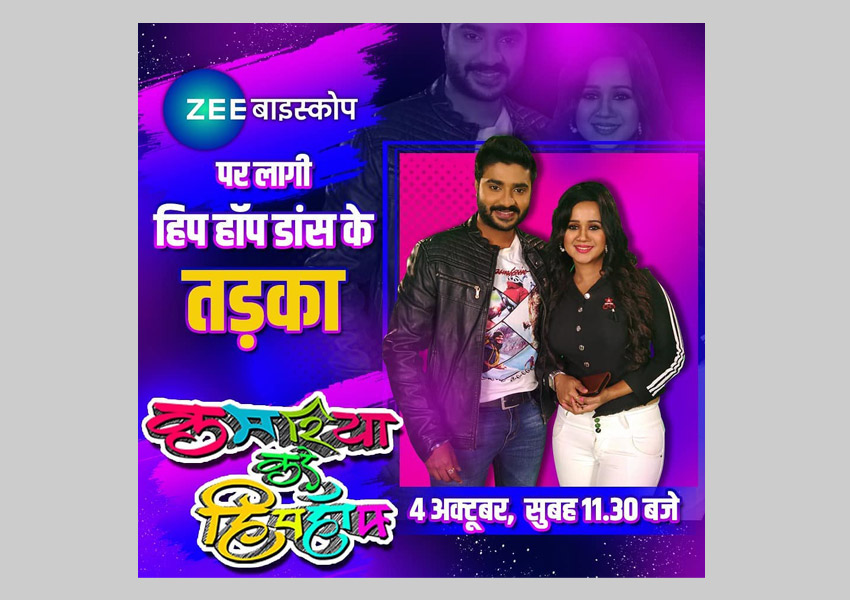 On the occasion of Dance Day (September 19), ZEE Biskope presented fans with a unique dancing treat in the form of its recently-curated engagement drive – Kamariya Kare Hip Hop. Taking the channel experience far beyond the realm of their blockbuster movies, the initiative, a category first, reached out to audiences located even in the most interior of regions. The channel launched a rap version of their brand song composed by 5 Tricks – a rap group from Bihar. Viewers were invited to perform on the rap song and share their videos with the brand through their Whatsapp number. Encouraging people to put their best foot forward, show their passion for dance and shake a leg, the immense appeal of Kamariya Kare Hip Hop saw it receive a terrific tally of more than 42,000 responses. This humungous response has a milestone moment in the channel’s legacy yet again.

Leaving no stone unturned towards celebrating the resounding success of the campaign, the channel has now come up with a special half-an-hour original show for its viewers on Sunday, October 4 at 11:30 am which will be hosted by none other than the celebrated Bhojiwood superstars — Chintu Pandey and Gunjan Pant. The show will not only feature the winning videos but will also project the significance of dance in Bhojpuri movies and how celebs have banked on it to entertain audience. Viewers will get to see the latkas, jhatkas & thumkas of their favourite superstars and the shake a leg with the channel’s brand song rap. The energetic Jodi of Chintu & Gunjan will entertain the audience with their superlative chemistry highlighting the charisma that the initiative has achieved. It’ll be a groovy joyride on a Sunday morning.

Making the day all the more entertaining for viewers, a special movie festival ‘Lachke Kamariya Nache Bhojpuriya’ has been curated. The movie line-up with ‘dance’ being the core theme will feature three tantalizing movies for viewers to enjoy on 4. The festival start sat 9:00 AM with ‘Nirahua Satal Rahe’ featuring the popular Jodi of Nirahua and Amrapali Dubey matching steps on some peppy dance numbers.It will be followed by ‘Challenge’ at 12 Noon featuring Pawan Singh &Madhu Sharma. Next in the line will be Deewanapan, yet another blockbuster in 3:00 PM slot which features KhesariLalYadav& KajalRaghwani.

Speaking about the success of the KamariyaKare Hip Hop, Samrat Ghosh, Cluster Head East, ZEE Entertainment Enterprises Ltd said, “The monumental response received for Kamariya Kare Hip Hop in just a few days is a testament to the consumer centrism in curating unique offerings that viewers not just relate to, but actively participate in. A digital contest extending to TV platform with an original show is a unique way to engage with our viewers while capitalizing on the strengths of both the mediums. It’s an attempt to make the brand accessible to the viewers providing them with a platform to showcase their talent.”

Sharing his thoughts about the same, Amarpreet Singh Saini, Business Head, ZEE Biskope and Big Ganga said, “Since its inception, ZEE Biskope has been differentiated, curated and engaged with novelty at its core. It’s the first channel in the category which extends movie experience beyond mere viewership to up close and facilitates personal involvement of viewers with the brand. Keeping that promise, Kamariya Kare Hip Hop contest’s finale has been given an original show format with popular starcast for the first time ever. We believe the show will elevate the entertainment quotient of our viewers taking them for a hip-hop joyride.”

Stay tuned and make the most of entertainment only with ZEE Biskope.