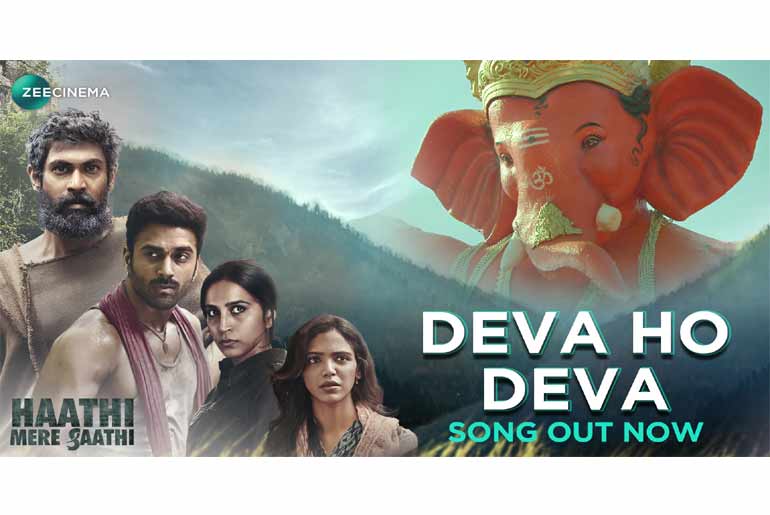 In sync with the festivities and ahead of the direct-to-TV release of the much-awaited film Haathi Mere Saathi, Zee Cinema celebrates Ganesh Chaturthi in a grand manner with an exclusive Deva Ho Deva-rendition for ‘Haathi Mere Saathi’. Sukhwinder Singh’s Deva Ho Deva is an energetic and melodious song and fits right in with ‘saving the elephants’ theme of the upcoming Rana Daggubati, Pulkit Samrat, Shriya Pilgoankar and Zoya Hussain’s starrer releasing on Zee Cinema on 18th September at 8pm. Zee Cinema chimes in with the song on the grand occasion of Ganesh Chaturthi to further spread the message of saving the elephants.

The channel has launched the song’s video featuring the uplifting moments from the film Haathi Mere Saathi. This rendition of Deva Ho Deva is an exclusive festival activity ahead of the movie’s direct-to-TV release on the channel.

A celebration of positive vibes and good deeds, Ganesh Chaturthi marks the very end of evil and beginning of all things good. Haathi Mere Saathi tackles one such strong topic, an ultimate battle of good over evil. As the film approaches its release, Ganesh Chaturthi celebrations will help people connect and reflect over the film’s core message.

Talking about the song, Shriya Pilgaonkar said, “Ganesh Chaturthi has always been very special to me. The God of good beginnings, the protector of all, the deity that is very close to my heart.  I noticed a similarity during the shoot of Haathi Mere Saathi where we felt the same in the company of those elephants. It seemed that they connected with us too. Gentle giants. That’s why, ‘Deva Ho Deva’ is a song that fits perfectly for both Ganesha and the movie Haathi Mere Saathi.”

Haathi Mere Saathi is a heartening tale of Bandev’s (Rana Daggubati) perseverance and his deep connection with nature. A man who dedicates his life, living in the jungle, to the purpose of protecting the elephants and their ecosystem. Witness the inspirational tale of Haathi Mere Saathi directly on your TV screens on Zee Cinema on 18th September at 8 pm.

This Ganesh Chaturthi, join the celebration with the direct-to-TV release of Haathi Mere Saathi on Zee Cinema!