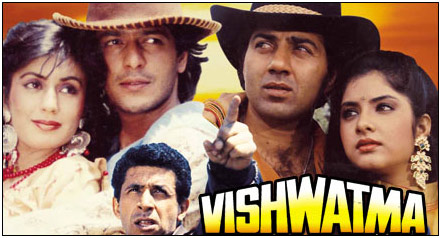 A police officer and a young man set out on a mission to avenge the death of their loved ones and travel miles to capture the culprit. The sixth highest grossing movie of 1992, produced by Gulshan Rai and directed by Rajiv Rai, Vishwatma marked the Bollywood debut of late actor Divya Bharti. The movie stars Sunny Deol, Naseeruddin Shah, Chunkey Pandey, Amrish Puri, Gulshan Grover and Dalip Tahil and is known for the evergreen song ‘Saat Samundar Par’. Zee Classic, with its proposition Woh Zamana Kare Deewana will air Vishwatma on Saturday, 2nd June 2018 at 7PM.

A respectable police officer Prabhat Singh (Sunny Deol) is at logger-heads with a hardened criminal – Azghar Jhorat (Amrish Puri) who is based out of Kenya, but is active in India. After a series of crimes committed by Azghar, Prabhat decides to travel to Kenya to capture him and is accompanied by a young man Akash Bhardwaj (Chunkey Pandey), whose brother was killed by Azghar. Once in Kenya, the duo meet a Kenyan police officer Surya Pratap Singh (Naseeruddin Shah), who is an Indian by origin. Surya Pratap pledges to support Prabhat and Akash in their quest to find Azghar, but their mission gets compromised as they get trapped in a wicked plan.

What is the plan?  Is Surya Pratap Singh hand in glove with Azghar? Will Prabhat and Akash succeed in their mission?

To know more, watch Vishwatma on Saturday, 2nd June at 7 pm only on Zee Classic.