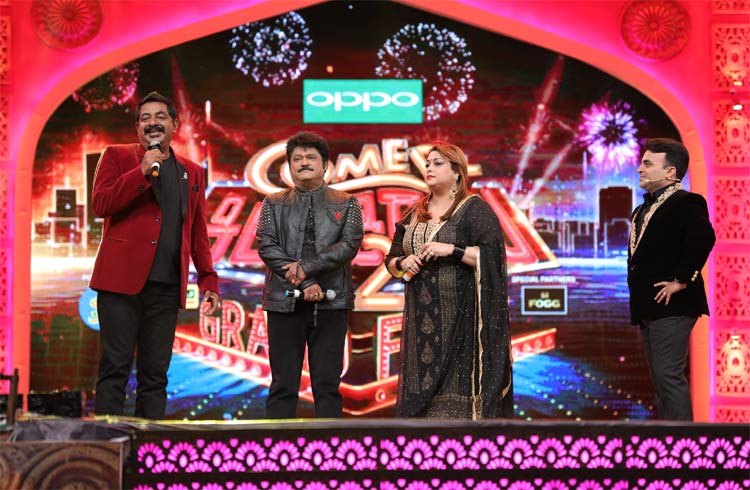 Zee Kannada is all set to offer its final laughter capsule with the Grand Finale of its super-hit comedy reality show and competition – Comedy Khiladigalu Season 2!
For the first time in the history of the Kannada General Entertainment Channel market, Zee Kannada hosted a mammoth Grand Finale in Bijapur which witnessed by more than 25000 people attend the event from the town.
The first leg of the programme saw one of Zee Kannada’s most sought-after anchors, Master Anand, perform to some lively and popular retro numbers. The prestigious panel of judges Jaggesh, Yograt Bhat and Rakshita made a legendary entry onstage with some energetic performances.
The success of any show is measured based on the contestants who put their best foot forward every single time. The seven finalists included Appanna, Manu Madenoor, Mantanna, Sadhanandh, Suraj, Vani Chenaraya Patanna, Surya, Barkath Ali, Chidambar Raunchier and Raghu who received a roaring welcome as they entered the stage before their performances. With a total of four skits performed in groups, the ultimate winner was chosen based on fifty percent from SMS voting that was open to the public till 11.45 PM on 17th June, and the rest from scores awarded to each individual by the three judges. The highlight of the evening was that, of the four skits performed by the finalists, one was Raju Talikoti’s highly-acclaimed Kaliyugada Kuduka.
The biggest surprise for the crowd in BIjapur was Raju Talikoti himself, the Grand Finale guest of honor. One of Sandalwood’s favorite comedian hailing from this modest town of Bijapur, Talikoti left the audience with their stomachs aching from all the laughter with his act from his Kaliyugada Kuduka along with Jaggesh, who impersonated his character from the movie, Eddelu Manjunatha; this set the pace for an evening of laughter and mirth!
were highly humorous performances by Comedy Khiladigalu finalists – Appanna, Manu Madenoor, Mantanna, Sadhanandh, Suraj, Vani Chenaraya Patanna, Surya, Barkath Ali, Chidambar Raunchier and Raghu that left audience erupting in laughter and gasping for breath. These comedians were judged for their individual performance by judges as well as the audience through SMS voting.
Commenting on the grand finale, Raghavendra Hunsur, Business Head, Zee Kannada said, “Comedy Khiladigalu has proved time again to be our viewers’ favorite weekend show, thanks to the hilariously fantastic performances by our talented participants in the last two seasons. It is said that laughter is the best medicine and the second season’s grand finale amply proven that this show is truly a stressbuster! I hope our audiences enjoyed the show as much as we enjoyed making it. We hope to be back soon with something bigger, that will be nothing short of fantastic!”
Tune-in to the Grand Finale telecast on 24th June at 6.00 PM to witness these finalists battle it out, leaving the audience erupting in laughter and gasping for breath, only on Zee Kannada.