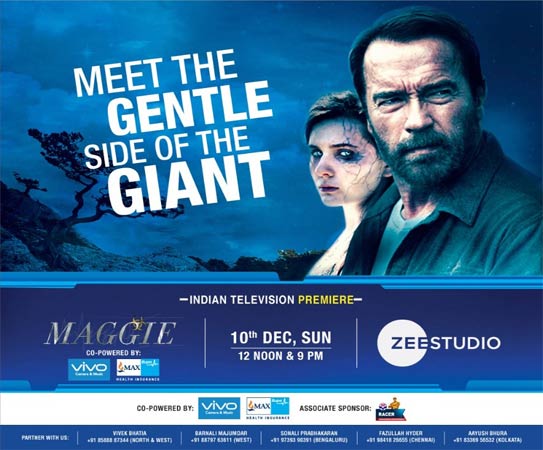 When a deadly zombie virus sweeps the nation, a father’s love can prove stronger than the horror of the invaded virus. Presenting the story of a father’s struggle to save his daughter from a zombie pandemic virus, Zee Studio, the ultimate Hollywood movie destination, brings the Indian television premiere of Maggie. Starring multi-award winner Arnold Schwarzenegger and Academy Award-nominee, Abigail Breslin, this post-apocalyptic drama premieres on December 10, 2017, Sunday at 12 noon and 9 pm.

Marking his debut as a Director, Henry Hobson’s Maggie sees Arnold Schwarzenegger break away from his action-star image to essay the role of a sensitive protective father. He plays a Midwestern farmer who stays by the side of his beloved teenage daughter (Breslin) even as she slowly turns into a cannibalistic zombie. This heart-wrenching twist on the zombie apocalypse puts a human face on an inexplicable horror.

The premiere of Maggie is a part of Zee Studio’s promise of 12 months – 12 premieres offering. The movie takes the zombie genre in exciting new directions, offering something for everyone – star power, horror, suspense and riveting performances that will keep the audience glued to their television screens.

So, don’t forget to catch Arnold Schwarzenegger in one of his best performances in Maggie, premiering December 10, 2017 at 12 noon and 9 pm only on Zee Studio.