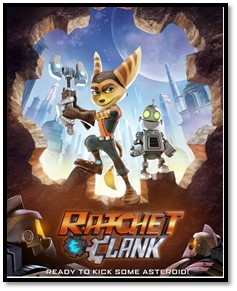 It’s time to relive your childhood and Kick Some Asteroid! This Children’s Day, Zee Studio, the ultimate Hollywood movie destination, is all set to bring the Indian television premiere of the fun animated sci-fi film Ratchet and Clank. Based on the video game by the same name, the movie boasts of an amazing cast of voice talents like Sylvester Stallone, James Arnold Taylor, David Kaye, Paul Giamatti, John Goodman, Bella Thorne, and Rosario Dawson. The action-comedy hits your television screens on November 19, 2017 at 12 Noon and 9 PM only on Zee Studio.

Directed by Kevin Munroe and Jericca Cleland, Ratchet and Clank follows the lives of the two protagonists, Ratchet the Lombax repair guy and his sentinel robotic friend Clank. The two unlikely heroes struggle to stop a nefarious alien named Chairman Drek from destroying every planet in the Solana Galaxy. When the two stumble upon a dangerous weapon capable of destroying planets entirely, they decide to join forces with a team of colourful heroes called The Galactic Rangers to save the galaxy. Along this thrilling journey they learn about heroism, friendship and the importance of discovering one’s own identity.

Building up the excitement to its on-air, Zee Studio has curated a special property [email protected] for all the animated movie buffs. Starting November 13 to 17, the channel will take its viewers on an adventurous week of power-packed blockbuster movies at 9 pm – How to train your dragon, Kung Fu Panda, Madagascar, Asterix and Megamind.

So, bring out the child in you this Children’s Day and See It All as Zee Studio brings the Indian television premiere of Ratchet & Clank on November 19, 2017 at 12 Noon and 9 PM.