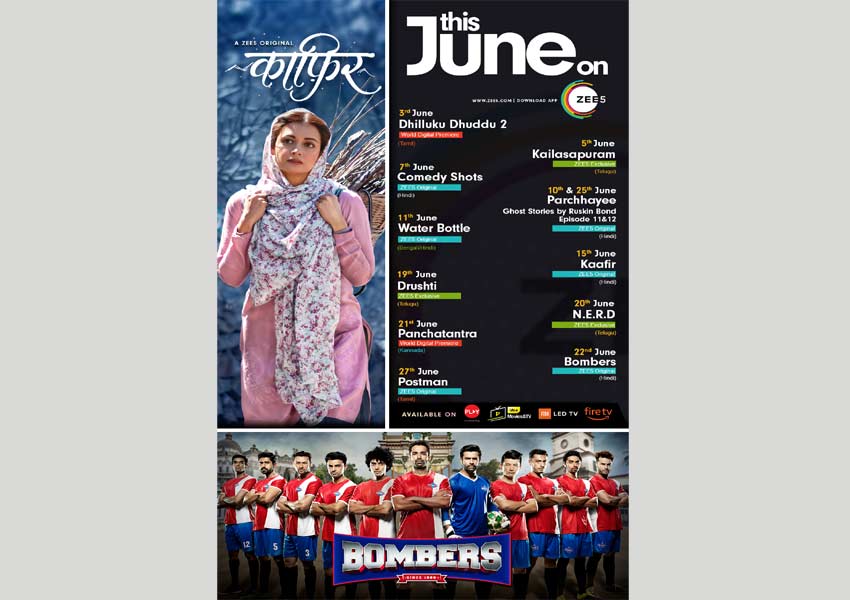 ZEE5 presents a fantastic line-up across movies and Originals across languages, this  June.

The monsoon surprises are packed with entertainment and path-breaking content. Shows to wait for include; 11th and 12th episode of Parchhayee – Ghost stories by Ruskin Bond, Kaafir, based on a true story is a tale of a young Pakistani woman who comes into India through a strange series of circumstances and is unable to go back home, starring Dia Mirza and Mohit Raina and Bombers, starring an ensemble cast Ranvir Shorey, Prince Narula, Flora Saini, Aahana Kumra and others along with ZEE5 exclusives N.E.R.D, Kailasapuram.

To add an essence of humour, Comedy Shots, a first ever stand-up show featuring Gaurav Kapoor, Anubhav Bassi etc., amongst many other exciting films and shows.

ZEE5 is known for the vast movie library that it hosts. This June, adding to its rich collection of movies   are Tamil movie Dhilluku Dhuddu 2 and Kannada blockbuster Panchtantra.

Commenting on the content line-up for June, Aparna Acharekar, Programming Head, ZEE5 India said, “At ZEE5, we recognize the need of our audience to have varied content choices. We are constantly working towards putting together great stories relevant to our platform. After the success of our last month’s releases such as Badnaam Gali, Skyfire and Bhoot Purva we are now coming up with Originals such as Comedy Shots (Hindi), Water Bottle (Bengali/Hindi), Postman (Tamil), Kaafir and Bombers (Hindi), along with World Digital Premiere of blockbuster comedy drama Panchatantra (Kannada). With this line up, ZEE5 promises high quality content to keep our viewers across  hooked to the platform for the entire month.”