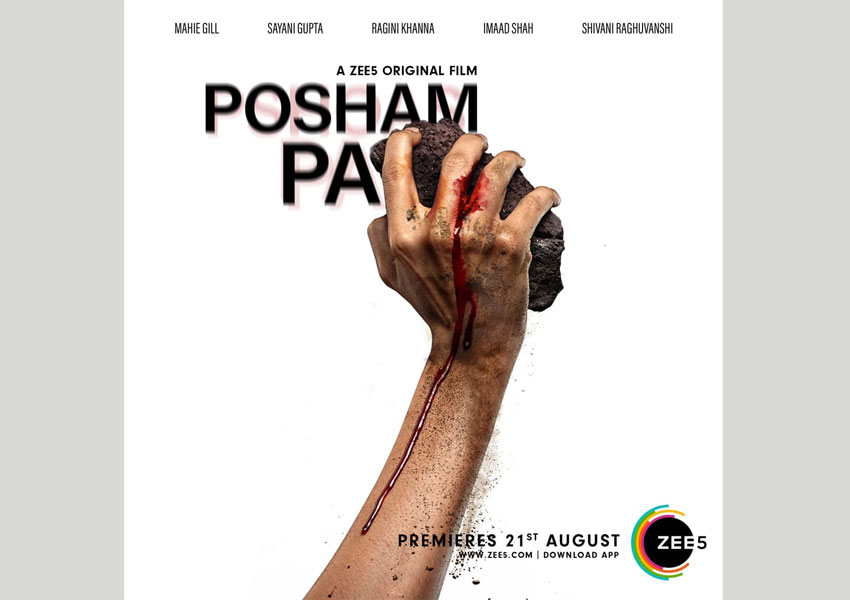 ‘Posham Pa’ has been inspired by true events, researched by senior journalist, Praful Shah. The story revolves around a psychologically disturbed mother who coerced her daughters into a life of crime. The daughters are now facing the death penalty for their violent crimes and spieling their life story to two documentarians essayed by Imaad Shah and Shivani Raghuvanshi.

The film has been shot in three different non-linear tracks and is sure to keep the viewers engrossed with twist and turns.

Sharing her perspective, Mahie Gill said, “The story of Posham Pa is inexplicable.  I still cannot fathom how circumstances can make someone so cruel. It is one of the most challenging roles I have essayed and when I heard the script, I decided to take it up almost immediately. We are now looking forward for it to premiere on ZEE5 and be available to a global audience.”

Sharing her experience, Sayani Gupta said, “It has been a very difficult journey to get under the skin of my character. Right from my look to the brutality of the murders, it has all been mind-numbing.  Getting into the psyche of a criminal drains you physically and emotionally. Posham Pa will premiere on ZEE5 and will reach such a wide audience base.”

Sharing her thoughts Ragini Khanna said, “Posham Pa has an enticing plot, making it a must watch for viewers who enjoy watching thrillers. It was a tough shoot and an experience which I will carry with me forever. It is an exciting time for new stories and content to flourish . I am happy that ZEE5 is backing such unique stories and we are looking forward to the release on the platform.”

Director Suman Mukhopadhyay said, “We are presenting a film that has multiple focal points. Truth and reality look so puzzling when seen from different perspectives. The script brings this out through a nonlinear treatment. However, the actors have walked a distance to ensure their performance is power-packed. To portray the psychological labyrinth of the characters that travels few decades, is an immensely challenging task. Everyone has worked very hard in putting this together and I hope with ZEE5’s massive reach, Posham Pa travels extensively.”

Commenting on the announcement, Aparna Acharekar, Programming Head, ZEE5 India said, “At ZEE5, we are working towards building a robust library across genres. Posham Pa is our latest addition, a compelling story with an eclectic star cast. It is an offbeat story and we have got on board powerful actors who are perfectly suited for their respective roles. Posham Pa is currently in the post production stage and we are  looking forward to release it on our platform soon.”

Tags:
Previous Article
Khushali Kumar – set for the silver screen!
Next Article
Mallika Sherawat, Tusshar Kapoor face off on ‘Battle of the Sexes with Sarthak’

Mallika Sherawat, Tusshar Kapoor face off on ‘Battle of the Sexes with Sarthak’
MediaInfoline Jul 17