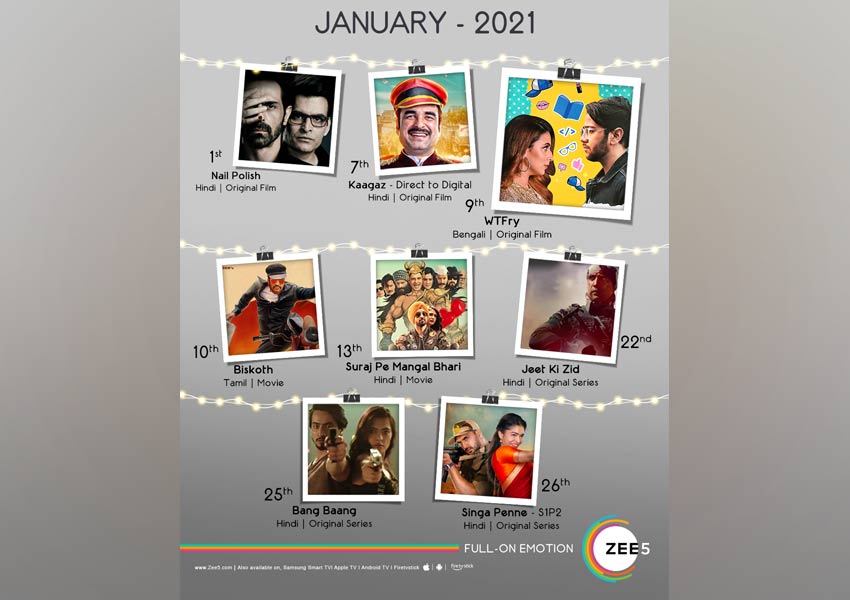 To begin the new year with a bang, the largest OTT platform for South Asian content, ZEE5 Global, unveils an unparalleled line up of content.

Starring the epitome of versatility, Pankaj Tripathi in the lead role ZEE5 Original Kaagaz is a satirical comedy arriving January 7. This Satish Kaushik directed movie narrates the story of a man fighting for his life for 19 years after being declared dead by a group of people who were keen to take over his assets. This has been one of the most anticipated releases of 2021.

On January 9 premieres ZEE5’s second Bangladeshi Original ‘What The Fry‘ directed by national award-winning director Anam Biswas. This is the tale of two individuals falling in love and finding a deeper meaning to life, one of them being a suicidal film star and the other a simple guy. Bangladeshi viewers can watch this show for free.

Two digital-first blockbuster films are in line to release under its pay-per-view vertical – Plex. Taking us back to the no social media era, the comedy-drama Suraj Pe Mangal Bhari will release on January 13. In this, a wedding detective performs background checks on prospective grooms. Some of the most revered actors of the industry including Manoj Bajpayee, Diljit Dosanj and Fatima Sana Shaikh feature in the movie.

With two prolific stars of the Tamil film industry, Santhanam and Tara Alisha, another comedy-drama, Biskoth gets released on January 14.

Amit Sadh starrer Jeet Ki Zid hits the platform on January 22. Showcasing a true story about grit, determination and the military, this is a tale of a soldier who overcomes tough challenges and turns the impossible into possible.

Bang Bang from ZEE5-Alt Balaji will premiere on January 26.  Starring Ruhi Singh, Faisal Sheikh amongst others, Bang Bang is a high-octane thriller which has been shot in the picturesque landscape of Maharashtra.

On Indian Republic Day – January 26, the second part of Singa Penne S1 premieres. This Tamil serial will continue the story of a girl falling in love with a boy in the military forces and later crossing every hurdle to join the army herself.

Based on the evergreen mantra that opposites attract, Teri Meri Ek Jindri comes on January 27. This is the story of two young lovers against the backdrop of Punjab.