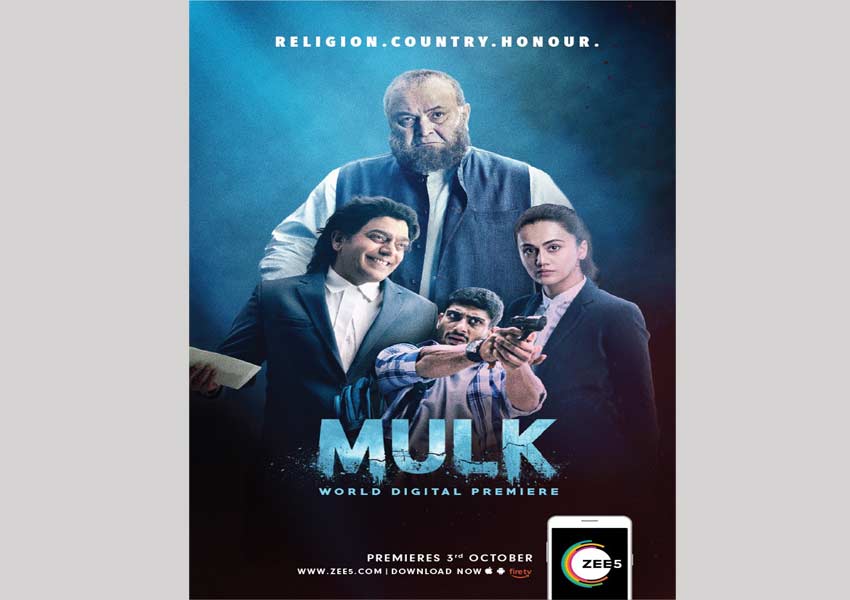 Mulk is an intense drama based on a true story where a Muslim joint family from a small city in India is trapped in a dark controversy and trying to reclaim their honor. The movie focuses on some hard-hitting issues and other faces of terrorism which are often hushed about. Directed by Anubhav Sinha, the movie sets out to uncover the prejudice that seeds people’s perception for the Muslim community in our country. The movie also features a well-known star cast including Prateik Babbar, Rajat Kapoor, Ashutosh Rana, Neena Gupta among others.

Manish Aggarwal, Business Head, ZEE5 India, said, “We have been receiving a great response to our exclusive digital premieres and the global premiere of Mulk will further drive engagement with the viewers. We have already premiered superhit films like Padman, Parmanu, Veere Di Wedding to name a few and they have all been well received. We will continue to have interesting additions to our movies catalogue with latest blockbuster releases straight after the theatre release providing unlimited entertainment options to our viewers combined with quality content.”

Director Anubhav Sinha commented, “We are delighted to associate with ZEE5 for the global digital premiere of Mulk. While we received a fabulous response on the theatre release, I’ve been inundated with enquiries from people who missed it in the theaters for its digital release. ZEE5 with its wide global reach will help those audience watch the film. We hope for a similar feedback and support from consumers for the digital release as well.”