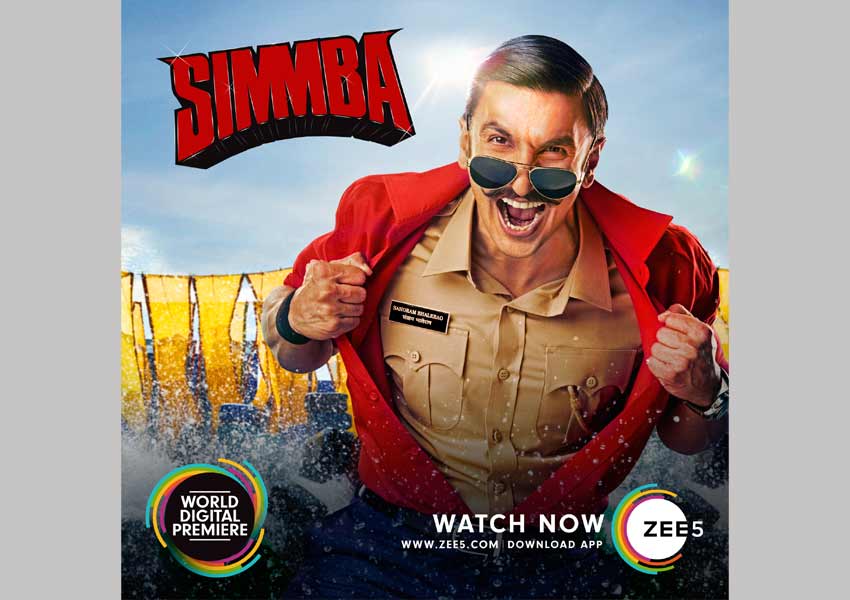 ZEE5 announces world digital premiere of SIMMBA.The blockbuster with a power packed star-cast comprising Ranveer Singh, Sara Ali Khan, Sonu Sood and Ashutosh Rana in lead roles, icing it off with a special appearance by Ajay Devgn, is set to premiere on 21stMarch on ZEE5.

After a having phenomenal run at the box office, Rohit Shetty’s high decibel cop drama is all set for a world digital premiere on ZEE5.The story revolves around Sangram Bhaleraoplayed by Ranveer Singh, a notorious cop who wants to make money. Until an event happens in his life, which alters him and makes him choose the moral path.

Manish Aggarwal, Business Head, ZEE5 India, said, “For over a year, since our inception, Originals and World Digital Premieres have been our key content pillars. While we have had a good run with our Originals, we have also presented some of the biggest blockbusters on the platform straight after their theatrical releases. This year, we have two of the most popular and successful films– Uri: The Surgical Strike and Simmbapremiering back to back on the platform. Fans all over have been eagerly waiting for Simmba to release on ZEE5 and the film with its sheer mass appeal and striking performance by Ranveer Singh is certain to become a huge success just like it did at the box office.”

Rohit Shetty, Director, Producer – SIMMBA, commented, “SIMMBA is a thorough entertainer yet the issue we are addressing had to be dealt with seriousness. I am glad that the audience loved the film along with the concept of our cop universe. World digital premiere on ZEE5 is a great opportunity for us to take the film to audiences across the globe.”