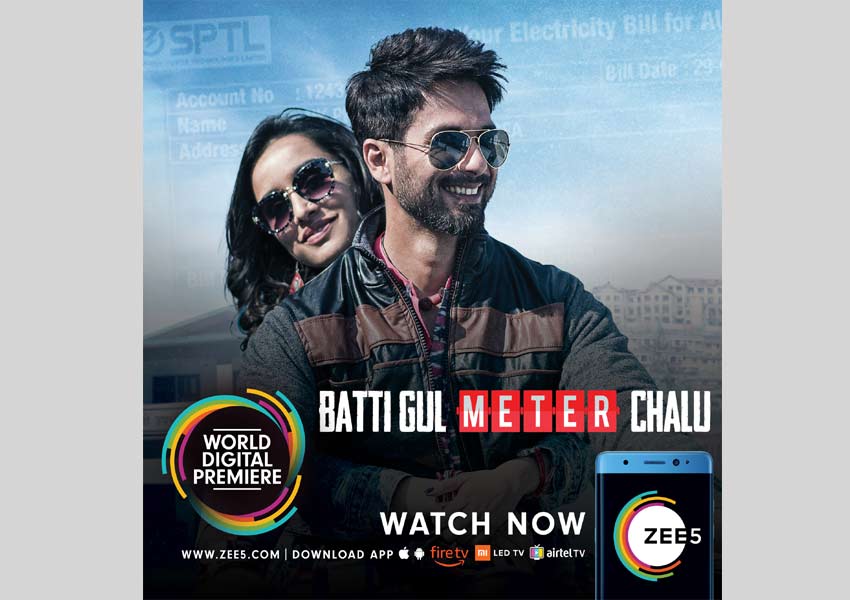 ZEE5 is all set to stream Batti Gul Meter Chalu,first time on digital,since its theatre release.Starring Shraddha Kapoor and Shahid Kapoor in lead roles, the movie will be exclusively available for ZEE5 subscribers from 22nd November.

Written and directed by Shree Narayan Singh, Batti Gul Meter Chalu is a social drama which highlights the plight of people suffering at the hands of power companies and their constant struggle to make themselves heard. The story grips you with its real-life screenplay, powerful dialogues and gripping performances by the cast.

Manish Aggarwal, Business Head, ZEE5 India said, “We are consistently strengthening our World Digital Premiere property with blockbuster titles for our viewers. So far, movies likeVeere Di Wedding, Parmanu, Padman, Mulkand many more across Hindi, Marathi, Bengali, Tamil, Telugu, have garnered a positive response across markets. Batti Gul Meter Chalutalks about an important issue and will definitely resonate with our audience. With a strong line-up of latest movie releases, we plan to make ZEE5 the undisputed digital entertainment destination.”

Vinod Bhanushali, President – Marketing, Licensing and Publishing, T-Series said, “Releasing the movie on ZEE5 will help us multiply the reach and highlight the issue among relevant audiences. This movie is an honest attempt to address a deep-rooted concern and it is made in such a way that itentertains yet gives out a strong message. The World Digital Premiere on ZEE5is be a good development for all those who have missed watching the movie in theatres.”