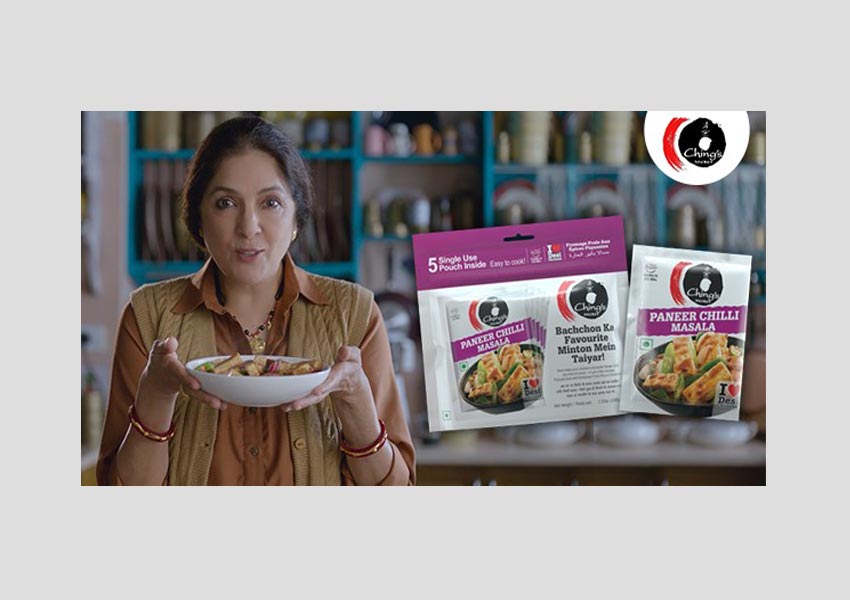 The campaign features four commercials directed by the National Award-winning producer, Maneesh Sharma of Dum Laga Ke Haisha and the director of Band Baaja Baaraat, Shuddh Desi Romance and Fan. Maneesh said, “It is always thrilling to associate with Ching’s – a brand that constantly looks to excite consumers and connects with them by capturing their feelings through innovative commercial ideas. The experience of working with the nation’s new ‘bahu’ Neena Gupta and with one of the most popular Marathi actors, Priya Bapat, was also enthralling.” Maneesh had earlier also directed the legendary Sridevi in a Ching’s music video and campaign for masalas.

To engage with regional consumers, Neena Gupta appears in three different avatars – as practical, no-nonsense housewives from Haryana, Bihar and Punjab, while Priya Bapat features as a cheerful housewife from Maharashtra. Both of them brandish pans and ladles and cook up Schezwan Fried Rice, Paneer Chilli and Chowmein Hakka Noodles with ease – while they talk candidly to camera showing viewers that there’s nothing to fear while making Desi Chinese.

Though Desi Chinese is the 2nd largest cuisine in India, most people still fear making it at home. This campaign intends to dispel these fears by telling mothers that, ‘Jab bhi kare dil… Desi Chinese nahin mushkil!’ In other words, it’s so easy to cook your family’s favourite Desi Chinese dishes with Ching’s Masalas.

On her ‘triple’ role, Neena Gupta said, “These Ching’s Secret films took me back to my North Indian roots which also helped me bring some local flavour to the characters that I play. I had to ensure that each of the three characters were different. It’s exciting to be associated with a brand like Ching’s Secret which always delivers something hatke to the audience.” Priya Bapat expressed her excitement of doing a Ching’s Secret ad, “I love the brand Ching’s Secret – it is one of my favourites – because I am as Desi and fun as their Desi Chinese! Their films are always different with the message delivered in a sassy manner. I’m glad to have worked on this ad campaign that is so simple yet impactful. Hoping to have done justice in delivering the message and that consumers will like it.”

Over the last 5 years Ching’s has created campaigns that have become the talk of the town. The campaigns are full-on entertainment and made on a large scale with leading Bollywood directors, stars, music directors and choreographers. The Ching’s brand ambassador is the iconic actor Ranveer Singh aka, “Ranveer Ching’ who has featured in three mega films for Ching’s which have racked up millions of views online.

Navin Tiwari, the CEO of Capital Foods added, “Food is an integral part of India. It unites the varied demographics of the country and yet lets each region maintain its own uniqueness. However, Desi Chinese is a cult food loved across the country by people of all age groups. Recognizing this distinctiveness, our masalas make the whole cooking experience as enjoyable as the dining experience. Through this campaign we have brought to life various parts of India and have united them with easy-to-make Desi Chinese.”