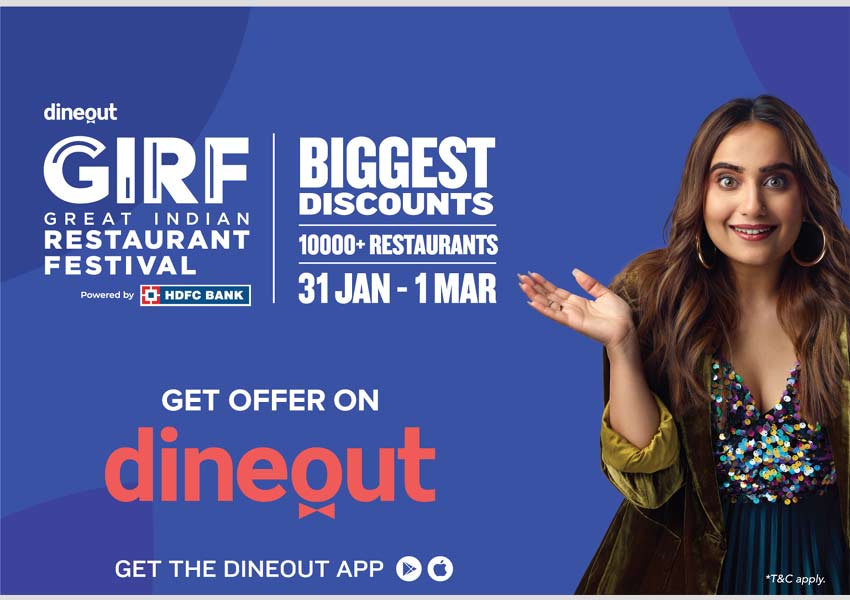 Dineout has also released a digital film around the festival focusing on “No Drama, Only Khaana” as a solution to diners who want value for their money without any drama, excuses or influences like birthdays, anniversaries and more, often used by people to get the best deals at restaurants.

The full brand film can be watched here. To further encourage the dining out culture in the country, Dineout also coined the new millennial lingo #JoyOfDiningOut which is similar to FOMO and YOLO.

Commenting on the latest edition of GIRF, Mr. Ankit Mehrotra, CEO & Co-founder, Dineout said,  “GIRF over the years has gained an unparalleled reputation of being one of the largest restaurant festivals in India. GIRF’s popularity affirms that Indians love dining out and are no more restricted to just occasions. With the biggest discounts and offers, we want to extend the #JoyOfDiningOut in the truest sense to our users across 20 cities, especially millennials who will resonate with the language of #JODO.”

Dineout has successfully organized 4 editions of GIRF since 2017. Last year, GIRF was introduced twice in the same year in the months of February & August, seating close to 2.5 million & 4 million diners respectively. It also helped its participating restaurants garner revenue higher than the usual days during both the editions. The participating restaurants witnessed 3x rise in their revenue in their most recent edition. GIRF deals for all can be bought starting 25th Jan for dining between 31st January to 1st March 2020 at restaurants like Social, Lord of the Drinks, Mainland China, Mamagoto, Smoke House Deli, Indigo Delicatessen, Radisson, Roseate, Burger King, McDonald’s, Pizza Hut & more.

Speaking on the association, a spokesperson from HDFC Bank said, “We are happy to be associated with Dineout’s Great Indian Restaurant festival for 3rd consecutive year. The festival in a short span of time has been instrumental in driving change towards the dining culture of India. The festival’s popularity has helped us build a strong connect with our customers also as they look for offers & cashbacks. While GIRF offers great deals, HDFC Bank customers can additionally enjoy exclusive deals & cashbacks during the festival.

Vikas Chandak, Senior Vice-President, Strategic Business & Partnerships of InterMiles, said, “We, at InterMiles, are committed to building strong partnerships that drive significant value & enriching experiences for our members. Our long-standing partnership with Dineout is immensely popular with our members and we witness a remarkable increase in engagement during the Great Indian Restaurant Festival. We are happy to participate in the 5th edition of GIRF as Food Sponsors & Reward Partners. We are confident that this year, once again, our members will enjoy the GIRF deals and the additional benefits brought to them by InterMiles.”

So, get ready to experience a month full of dining out at great discounts with no hidden agendas. Enjoy hassle-free experiences and without stressing about over-budget bills.