FYI TV18 presents ‘Recipes That Made Me’, this November 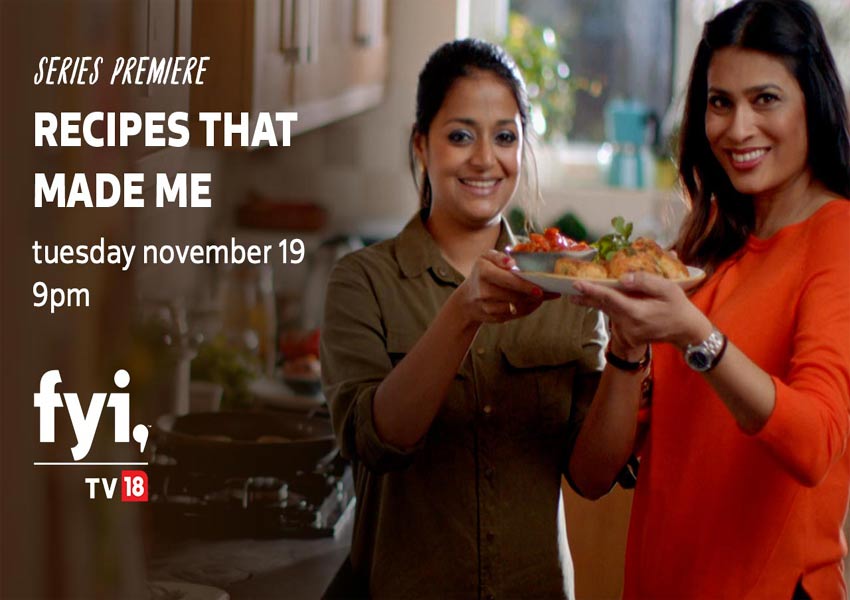 FYI TV18 presents a series dedicated to the legacy of food and the power it holds in all our lives. ‘Recipes That Made Me’ has UK-based Chef and Restauranteur Nisha Katona travelling around the UK, meeting diaspora from India, Bangladesh, Pakistan and Sri Lanka. She meets passionate home cooks who let her into more than just their kitchens, and discovers the stories behind their authentic family recipes. These wonderfully warm British Asian families also reveal some of their families’ closely-guarded secrets. For the culturally-curious, the series showcases immigrant culture in all its colourful glory, and shows how food is always at the centre of the emotional experience of building a new home and life. With a sprinkle of friendly banter, the four half-hour episodes also provide a unique insight into why we preserve recipes from our childhood.

As Nisha meets a host of interesting characters, she realises that the flavours of the subcontinent live on even as people build new lives around the world. Nisha learns the secret to cooking the perfect Punjabi curry, while she discovers the role it played in helping families transition from rural Punjab to the industrial heartland of the UK. She hears stories of diverse immigrant experiences, all of whom are centredaround the magic of recipes so familiar that they can whisk one back home in an instant. A young Sri Lankan student deals with homesickness by cooking a warm, soothing sweet-rice pudding called Pongal. Another woman has spent decades trying to guess all the ingredients in her mother’s secret spice mix so she can pass it on to her daughter. And, the experience of cooking tandoori chicken tikka still takes another long-time immigrant back to the communal meals of his childhood in his village back home in Punjab.

Family recipes passed down through generations are often seen as our ties to the past, a link with those who came before us. Sharing meals with family and eating together is one of the most primal delights known to humans, ahark back to our tribal ancestry. A long-forgotten flavour often evokes vivid memories of one’s childhood and allows us to relive feelings of comfort and satisfaction. Many people painstakingly maintain a family recipe book, preserving a magic formula that lets them access those feelings at any time. As India’s No. 1 lifestyle channel, FYI TV18 decodes this cultural phenomenon among the diaspora that holds their food traditions closest to their hearts.

Watch the premiere of ‘Recipes That Made Me’ on Tuesday, 19th November, at 9 PM, only on FYI TV18.

Double the Chicken, Double the Fun (minus the bun) with KFC’s Double Down Burger
Madhushree Chakrabarty Jul 22

Double the Chicken, Double the Fun (minus the bun) with KFC’s Double Down Burger