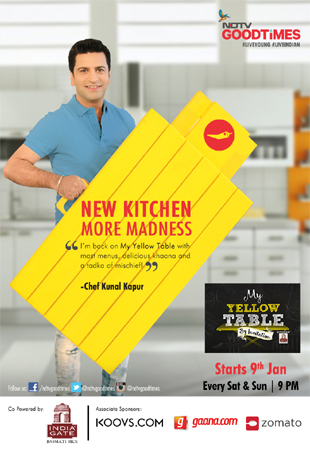 After a successful run of the show My Yellow Table, NDTV Good Times – India’s Youngest Lifestyle Channel is back witha second season of the series.

My Yellow Table – By Invitation, is helmed yet again by celebrity Chef Kunal Kapur.And this time, the charming Kunal amps up the fun, the food and his very own fundas on the show along with some celebrity guests! Yes, this season has a host of known faces visiting Kunal’s kitchen – from Amyra Dastur to Himani Shivpuri and Amrita Raichand to Maria Goretti, Sapna Pabbi, Sandeep Soparrkar, Anuj Sachdev, it is quite the party!

Talking about Season 2, Arati Singh, Channel Head, NDTV Good Times said, “We are happy to present My Yellow Table – By Invitation, with Chef Kunal Kapur. The previous season received great response from the audience and the new season will see the show take the recipes, fun and food talk a notch higher.”

Sharing his excitement, Chef Kunal Kapur said, “The thought behind My Yellow TableSeason II will definitely remain the same that is to bring out the Chef in everyone. The focus is to create Indian food with a twist in ingredients with a hope to convince viewers that cooking is not rocket science and everything that tastes good doesn’t have to be complex.”

The show promises the quintessential Kunal brand of simple yet delicious cooking, with a treasure trove of recipes and nuskhas to take home. As with the last time, the man with a plan to get everyone cooking hopes to inspire the latent chef in each one of us. The show will feature Indian cuisine with a Kunal touch – meaning a lot of flamboyance, abandon and experimentation!

Look out for the Mischief Box, Kunal’s little box of mystery that stumps many a guest on the show. At the end of his challenge is a grand prize for every guest, awarded in inimitable Kunal style! So whether you are an aspiring cook, a challenged cook or a demanding diner, you can always find a hearty meal at ‘My Yellow Table’!

Tune into Season II of My Yellow Table – By Invitation starting 9thJanuary, Saturday and Sunday, 9 pm only on NDTV Good Times because cooking has never been so easy and so much fun!