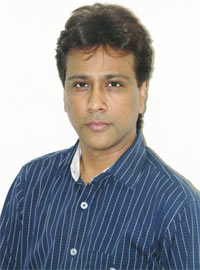 Rajesh Kumar Jain, who hogged the limelight by producing DD’s no.1 show Anudamini, speaks about his show and how Doordarshan is a great platform to showcase one’s work to its far reaching millions of viewers.

Q) Tell us about the show Anudamini?

The story is about a girl who is from Ranchi and comes to Mumbai, after getting married. Her problems start when her husband refuses to accept her as she is unable to adjust to the fast-paced life in a Metro. But she decides to make place for herself and starts a small business. Through all her trial and tribulations in relationship, she never forgets her duty as a wife or bahu.

Q) How did the concept of the show come about?

The show airs on DD on afternoon prime time (2p.m). Since the channel has a viral reach, it wants shows around social issues. I was the co-producer of the movie, ‘ I Am’, released in 2011, so I had slight advantage over the others who had submitted their pilots. Besides, I like to take up social issues and tell stories around them.

Q) What is the USP of this show?

I want to empower the women of this country who come from villages, small towns and cities and make them aware of the fact that if one wants to achieve something it is possible to do so, doesn’t matter whether one is from a metro or a village, what is required is determination, focus and dedication to keep them equally grounded in work and family.

It just happened. Also, DD gives you the space to work on meaningful issues rather than the shows. I like to tell stories differently. With DD, I can opulently take up such issues and Use my creativity independently under the policies and guidelines set by them. Though the returns are not that great, it is about spreading awareness among the women and doing quality work which interested me.

Q) Does that mean that you don’t want to work with private channels?

No, off course not but the kind of shows that they make are guided by what the audience wants and on a very different platform. They also have the budget to do so. Having said that, if I have a good story line with a social issue or some that is acceptable to private channels, I would love to make a show for them as well. None-the-less I aspire to take up a good script for the private channels also.

Q) Is it fair to compare DD with other channels?

Definitely not like I said. DD is committed to air shows that revolve around social issues; the other channels are entertainment driven. It will be difficult to compare the two. But DD is doing a great work. Over the next few years, it will become the most popular channel to watch like it was during Hum log and Buniyaad days.

Q) How is DD a platform to show case ones work?

One secures enough recognition and respect. Many of the popular producer and directors started their career with Doordarshan. It feels good when one walks into their office and people tell you that they love the show. The fact that Anudamini is the No.1 Show on DD gives me a euphoric feeling.

Q) Are there any other project in the pipeline?

Yes. One is comedy-based but again giving out a social message. The other, I am still working on the idea. Once they are complete, hopefully viewers will patronise them as much.