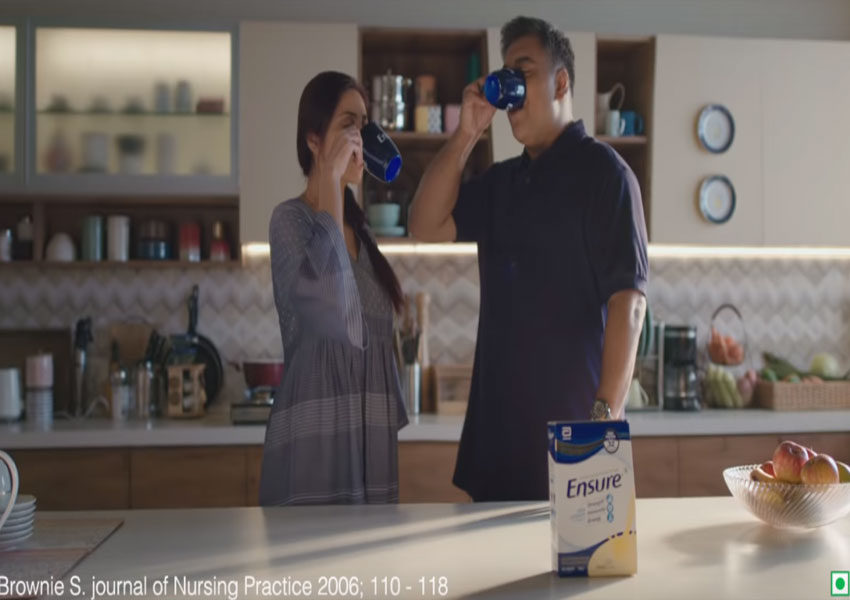 Abbott, the maker of Ensure™ has unveiled a new television ad film as part of its integrated #StrongerTogether campaign — capturing the concerns of people over 40 who are dealing with loss of muscle and strength.  The film leverages the chemistry of real-life couple and popular actors, Ram and Gautami Kapoor, to bring alive a day in life of a modern-day family.

Adults over age 40 lose 8% of their muscle every decade and are at a greater risk of facing restricted abilities in fulfilling everyday tasks or actions such as walking, taking the stairs or lifting objects in later years.

“#StrongerTogether is an integrated campaign which started with a simple but effective chair challenge called Stand4Strength, which  helped people understand whether muscle loss has set in by simply trying to stand up from a chair using one leg, with arms across the chest”, said Vikash Prasad, managing director and general manager of Abbott’s nutrition business in India.

“The #StrongerTogether challenge aims to help raise awareness about how muscle loss can set in as early as 40 years: if you are in your 40’s or 50’s and can’t stand up from a chair on one leg now, you risk not being able to walk in your 70’s. While the challenge highlighted the problem, we aim to bring awareness to this challenge through a film that shows how strength can be maintained through nutrition. We want to encourage people to live their healthiest and most fulfilled lives – without compromise,” Prasad added.

The #StrongerTogether film features real life couple — Ram and Gautami Kapoor — who are celebrating their wedding anniversary. At the behest of their daughter, the father agrees to whip up a special meal but reneges on his promise when fatigue and tiredness sets in by the end of the day, disappointing both his wife and daughter. The film then goes on to portray the science of using nutrition to regain strength in eight weeks. Ensure endeavours to alleviate these issues by offering the right balance of micro and macro nutrients that help provide bone and muscle strength, boost immunity and provide energy.

The ad film – created by Abbott in partnership with Leo Burnett India – can be seen here and on various media platforms including social, digital media & e-commerce. The film will run across major Hindi and regional general entertainment channels along with movies and news channels. The campaign will also be promoted across YouTube, Facebook and point of sale outlets.

Ensure is synonymous with complete, balanced nutrition. It is the only brand that focuses singularly on the needs of the 40+ adults who face loss of muscle and strength with age.

Tags:
Previous Article
Trevor Noah Extends His Tour Through 2020 On Popular Demand
Next Article
Discovery India aims to leverage the potential of Fukrey Boyzzz beyond TV