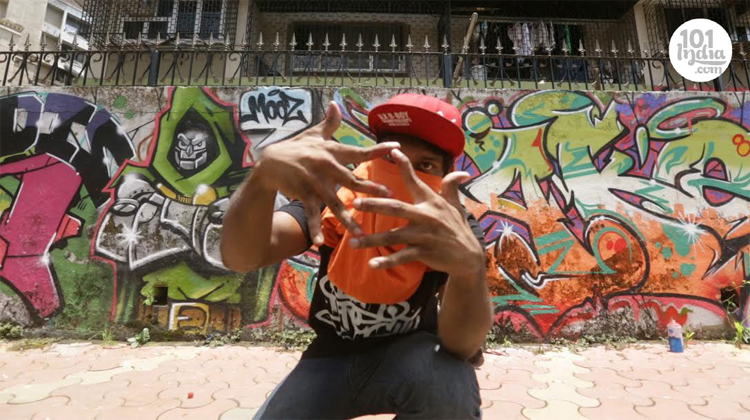 101India.com, a youth portal focussed on telling stories about a new India is launching a web series on the flourishing Indian underground hip hop scene called Hip Hop Homeland. It is a series of raw, gritty profiles about a fast emerging youth trend which cuts across gender, class and geography, and makes powerful statements of youth identity and voice.

Hip Hop Homeland begins in Mumbai and then travels to Kashmir, Shillong, Punjab, Calcutta and finally South India. The first leg of the series has been broken down into 11 videos focusing on the west coast spanning the entire scope of hip hop subculture – from rap to other forms of self-expression like dance and visual art.

The songs in the videos are not about the YoYo flavoured escapist fantasy of clubs, cars and women, but about the real issues these artists face in their ‘hood’. Within a broader cultural context, these are songs and experiences that India’s Bollywood culture has ignored, focussing instead on escapist fantasy.

Talking about the show, Cyrus Oshidar, MD & Chief Creative Officer of 101India said,” Our team panned out to different parts of India to discover talented rap artistes. The new trend in hip hop is coming through the slums and the chawls, and the rappers covered in the Hip Hop Homeland series speak in a street `bhasha’ that draws on local languages in a quest for authenticity. The sugar-coated romance that we see in Bollywood might have takers but there is also an audience for the angst and rebelliousness these boys express. These are voices worth listening to and their words are being amplified across the internet to a broader audience.”

One of the artists Aklesh Sutar aka Mawali, the Marathi rapper from Swadesi says, “We got the kind of love and reception in our mother tongue that we didn’t in English. Because of the internet, you can be sitting here rhyming in Bengali and finding your audience in Kolkata. It doesn’t matter where you are”.

Another rapper Dharmesh Parmar aka TodFod a part of rap crew Swadeshi says, “Hip means knowledge. Hop means movement. Hip Hop is the movement of knowledge. The reference here is to the larger sub-culture within which it falls. Within hip hop comes not just rap, but also other forms of self expression from music to dance to visual art, and ultimately, for these boys, a philosophy”.