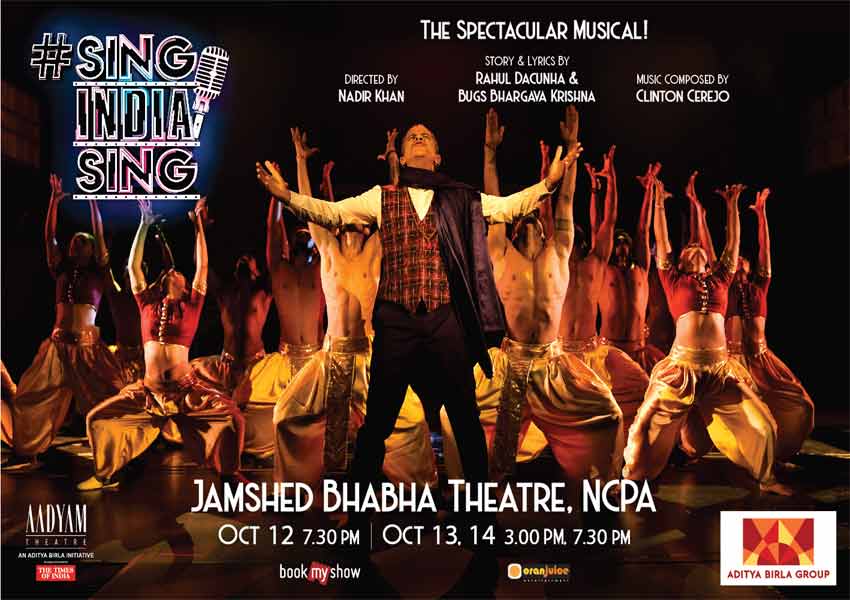 “Come WATCH the music”, says Rahul DaCunha the co-scriptwriter & lyricist of Aadyam’s first ever musical production #SingIndiaSing. Talking about how the idea of an original musical came into being, Rahul says, “A few years ago Bugs Bhargava Krishna, and I began to conceive the story and pen the lyrics for an original stage musical, beginning with the title #SingIndiaSing. For two guys, who’d been weaned on the rock opera brilliance of Jesus Christ Superstar, and the hip hop ‘today-ness’ of Hamilton, this was our opportunity to write our own ground-up musical – one that would appeal to the Indian palette.” The duo then decided to introduce their words to the perfect melody with Music Composer and Producer Clinton Cerejo. 1 year and 28 songs later, the original masterpiece is ready to be unveiled.

#SingIndiaSing promises to be a power-packed 2 hour theatrical that dabbles in all genres including Rock, Hip-Hop, Jazz, Pop, Soul and even a cool hint of Indian Classical. With a cast comprising of Television’s best (Suchitra Pillai, Kamakshi Rai), Indie rockstars (Uday Benegal, Siddharth Basrur, Sarosh Nanavaty, Naquita Dsouza) and Theatre sweethearts (Brian Tellis, Asif Ali Beg, Abhishek Krishnan, Delraaz Bunshah and Tavish Bhattacharyya), the musical promises to induct and entertain a much younger, digital audience into theatre while keeping the promise of a spectacular production to the loyal theatre-goers. In addition to the live singing, the musical plans to thrill the audiences visually with tech-heavy set design and larger than life choreography.

Brian Tellis, Co – Founder & Group CEO, shares, “At Oranjuice Entertainment, we pride ourselves on creating engagement platforms for brands that help them connect & engage with their target group. In this process, we ensure brand resonance, unique engagement ideas and integrity of operations.”

Directed by Theatre Sweetheart Nadir Khan (of Twelve Angry Jurors, Anand Express, God of Carnage fame), #SingIndiaSing is the story of four contestants on a reality show, seeking fame, reaching for the stars to become stars, in a dog-beat-dog world of show business – in a world where the internet is the mightiest power. The four aspirants are Vishnu- a true blue rocker from Pune, Kitty who is a sexy bar dancer from Dharavi, Jayashankar Iyer a.k.a Jazzy who combines Carnatic rhythms with Rap, and Shweta- the girl with a mask.

The show producers are Channel- the owner of the channel ‘Dhoom Dham TV’, Rocky Singh- a washed up music composer and Dolly-a show host and an ex-journalist who digs up dirt from the contestants’ past. The show also introduces the concept of ‘Hashtags’ – a personification of the internet world, the trolls-tweets-likes and disses. In the middle of this chaos, will the contestants discover there are greater things in the world than just celebrity and applause? Or will they lose themselves in the search for victory?

Aadyam, the Aditya Birla Group initiative, closes with a musical bang with #SingIndiaSing. Opening shows at the Jamshed Bhabha Theatre, NCPA on 12th October. Tickets are now live on BookMyShow.