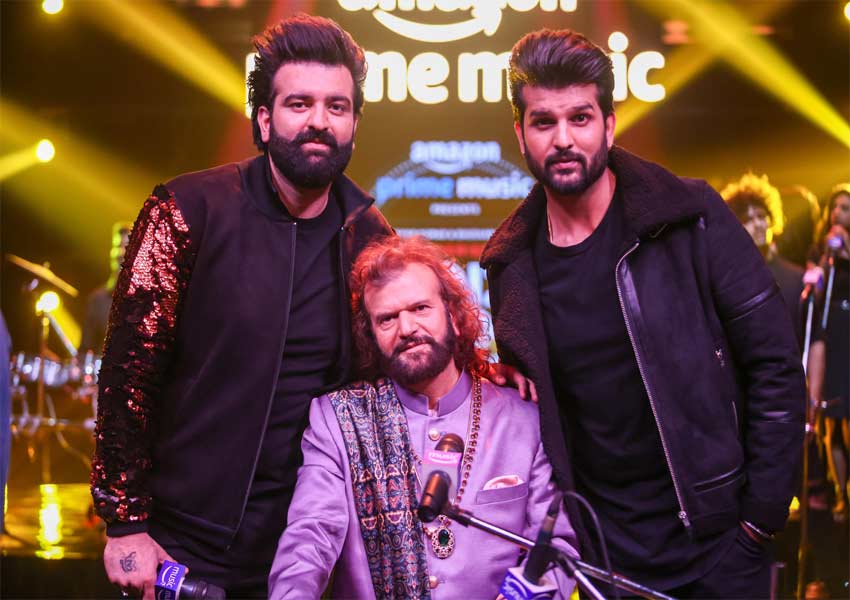 Remember how music videos were the order of the day in the ’90s and early 2000s. T-Series head honcho Bhushan Kumar has been relentless in giving a fillip to non-film music. A few years ago he started the MixTape series, which has proved to be a major success for the music giant. The MixTape series has encompassed several styles of songs, blended to create a refreshing mix and all of them have worked wonderfully well with the audience and the listeners at large. The first season of MixTape Punjabi, more than a year ago, had seen Hansraj Hans and his older son Navraj performing together. After the success of the father-son duo in the first season, this time T-Series brings together Hansraj Hans with both his sons to work their magic in a way only they could. In the latest episode of MixTape Punjabi Season 2 presented by Amazon Prime Music and produced by Bhushan Kumar, you will see legendary singer Hansraj Hans, along with both his sons Navraaj and Yuvraaj Hans.

The terrific trio present an exquisite medley of two popular Punjabi songs of all time — Mere Naina Vich and Rehan De; available first on Amazon Prime Music. This is also one of those special moments when the three men from the Hans family will be performing together for the first time ever. The melodious songs are accentuated with contemporary instrumentation, imbuing a certain magic to the incredible texture of the three powerful Punjabi voices.

Sahas Malhotra, Director, Amazon Prime Music, said, “The new season of T-Series’ MixTape Punjabi Season 2 has already gained immense popularity on Amazon Prime Music and no better way than to begin the new year with a never-heard-before performance by Hansraj Hans and his sons. In addition to the evergreen tracks by legendary singer Hansraj Hans, Prime customers enjoy listening to Vaddi Sharaban, Mundiyan by Navraj Hans and Judaai Pe Jaani and Paani by Yuvraaj Hans on the service. We are excited to bring this iconic MixTape exclusively, first for Prime members.”

Sharing his excitement Bhushan Kumar offers, “I am extremely delighted that the Hansraj family has come together on a T-Series platform. The relationship we share with Hansraj Hansji is not merely a relationship between a singer and a music company. We’ve known each other for 20 years. Hansji respects us and our company a lot. I am thankful he is performing this song with his family. I am certain it will be a treat for our viewers and audiences to witness them perform together for the first time.”

Vinay Sapru, who along with Radhika Rao has directed the series, calls it ‘History-in-the-making’. “We have the legend of Punjabi music Hansraj Hansji and for the first time, we have him with his two sons together. The entire family has come together for this one. Hansraj sir’s vocals and pitch have the complete sound of Punjab. To match it we have both the sons — Navraj has an absolute folk voice whereas Yuvraaj has a balladish tone to his voice. It’s such a magnificent combination of singing talent coming together and it’s every bit iconic. It will be a true collector’s edition. This is pure gold. The light design also reflects the history-in-the-making moment. This episode of Hansraj sir on harmomium, in tune with the modern elements of this light and sound show will be worth cherishing for all MixTape lovers.”

Hansraj Hans is happy to have these two tracks blended. He maintains, “Mere Naina Vich and Rehan De are two of my favourite tracks. I’m excited to present them to listeners again in a new form, especially new, young listeners, who probably haven’t heard the songs earlier. Abhijit Vaghani has done a brilliant job in combining both the songs and creating a soulful track. Radhika and Vinay have intricately conceptualised the visuals for this. I’m very happy with the way it’s looking and sounding.”

Talking about singing the track along with his sons Navraj and Yuvraaj, the doting dad informs, “This is the first time I’m performing with both my sons, we had a family reunion of sorts in Mumbai for this shoot. I’m so glad we got to do this together. Performing with my children makes me the happiest.”

His older son Navraj adds, “Mere liye bahot badi achievement hai. When I did my first song, I did it with my father’s blessings. That song was liked and blessed by all. Now, I’m even more excited to perform together with my younger brother and my ustaad. I am overwhelmed. I don’t have words to thank T-Series and Bhushan sir.”

The youngest performer Yuvraaj calls it a ‘dream come true.’ “It was my first time. When I saw my brother perform with my father in Season 1, I got jealous because I was not there. I was thinking when will I get the opportunity to perform together with both of them. This was the first time all three of us got to perform together on the same stage. It was unbelievably exciting. I am so lucky that I got the opportunity to perform with Paaji and dad, thanks to T-Series and Bhushan Kumar,” he smiles.