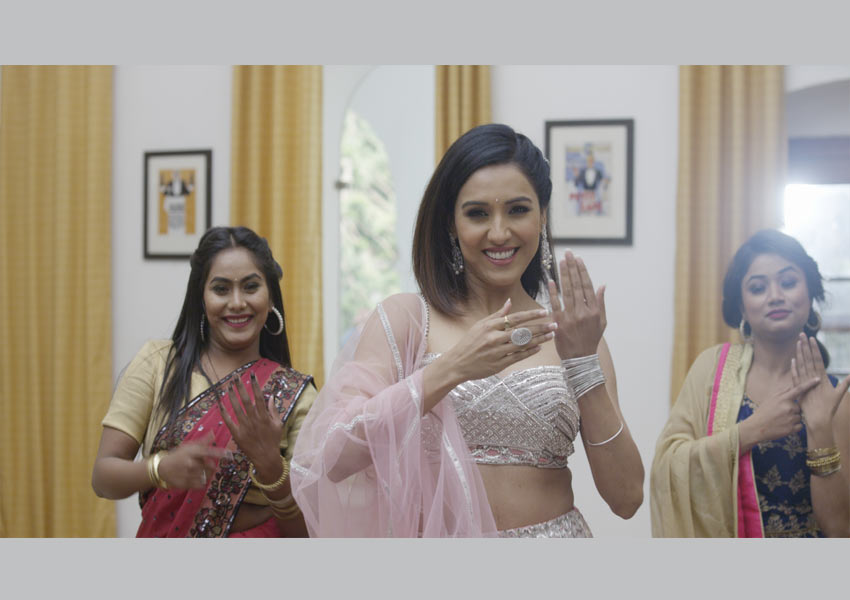 Though Kithe Reh Gaya is a video about an engagement ceremony, it packs in all the energy, vibe and vibrant colours of a traditional Indian wedding with extended family joining in the merry-making and the celebration. And why not?  Kithe Reh Gaya is about a ring ceremony waiting to happen in the luxurious Neemrana Hotel in Patiala. Hmm… but what is a love story without a few hiccups?

In Kithe Reh Gaya, the dashing groom accompanied by his friend is on the way to the engagement venue. On reaching the venue, they realize that instead of reaching Neemrana Hotel in Patiala, they have reached Neemrana Hotel in Jaipur.

At the other end, the ebullient girl, played by Neeti is waiting for her to-be fiancé and is visibly worried that it’s time to exchange rings but the man of the moment has still not arrived.  The video records the journey of the groom who surmounts various difficulties to reach his to-be bride. Some of it makes for quirky viewing.

Neeti Mohan breaks away from the tradition of a coy bride, lends a zestful quality to the vocal rendition of Kithe Reh Gaya and effuses it with an irreverent spirit, characteristic of a modern day woman.  She says, “Kithe Reh Gaya, my brand new single is full of new beginnings… it’s a song for every girl who’s in love. It’s a song of celebration with the family. I believe Kithe Reh Gaya is the song for every bride and bridesmaid. Super excited to showcase the video shot in Patiala to everyone.” Neeti shares some additional trivia. She points out, “The interesting thing is that we shot this song when it was six degrees in Patiala where I had to be in a lehenga-choli. That was coolness to the next level.”

Producer Bhushan Kumar adds, “Kithe Reh Gaya is a very refreshing dance number and will make you take a liking to it instantly. The beat is catchy and has been sung beautifully by Neeti. I am sure it will be one song that will make a mark among the non-film category.”

The music of the video is composed by Abhijit Vaghani, with lyrics by Kumaar and the video has been directed by Robby Singh.