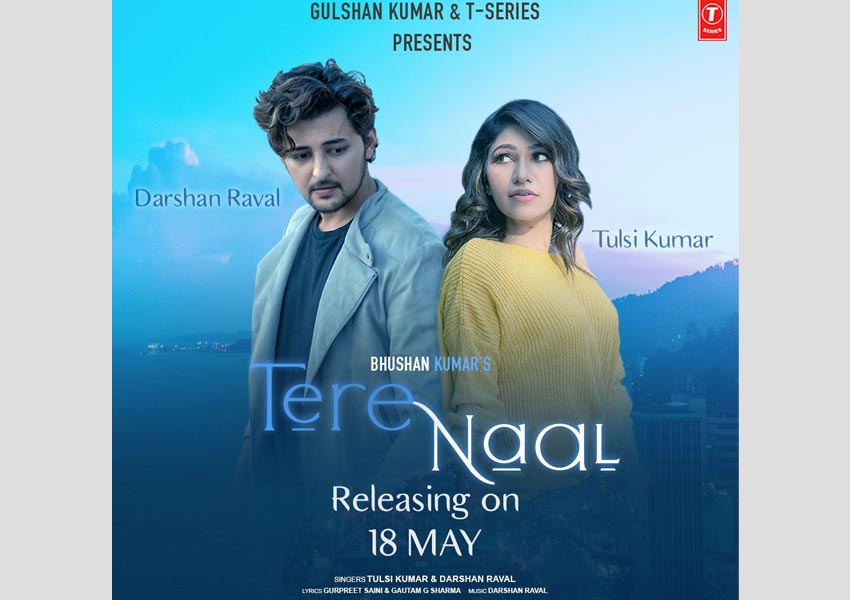 Tulsi Kumar and Darshan Raval are celebrated names in the music industry. Tulsi Kumar who is known for giving back to back Chartbuster hits in her career has numerous songs to her credit including Soch Na sake ,Tera Ban Jaunga, O Saki Saki, Enni Soni , Tum Jo Aaye among others. Darshan Raval on the other hand, became a household name with the blockbuster success of Chogada and Kamariya, followed by other hits like Odhani and Ek Ladki Ko Dekha Toh Aisa Laga among others.

Tere Naal, a soulful song about love and longing is their first collaboration together. It is a song about two people who want to be together but are forced to stay apart due to circumstances beyond their control. The song is presented by the biggest and most successful recording house in the country, T-Series.

Interestingly, both Tulsi and Darshan had been receiving requests from their respective fans to collaborate for a while now. The two decided this was the best time to spring a surprise on their audience and fan base.

Composed by Darshan Raval, with lyrics by Gurpreet Saini and Gautum Sharma, Tere Naal is an expression of pure and innocent emotions, which the makers guarantee will resonate with audiences across the country. Going the extra mile, Tulsi Kumar and Darshan Raval have recorded and shot the track from their respective homes in Delhi and Mumbai, amidst lockdown.

Talking about the song, Tulsi Kumar says, “This is my first collaboration with Darshan Raval and I do feel our voices work together very well. Darshan has also done an amazing job on the composition, keeping my vocal texture and tone in mind, which is a huge plus. This is a collaboration both our fans have been asking for, they’ve wanted us to work together for the longest time and it’s finally happened. I have a very positive feeling about this beautiful number.”

She adds, “I’ve done a lot of songs in my career, but I’ve never worked on a song this way, under such circumstances. The making of this song has made me very independent and it will always remain special to me.”

While the singers recorded and shot the song in their respective homes, owing to the current lockdown situation, they both consider it a memorable and enriching experience as two cities and two artists came together for this collaboration.

Points out Darshan, “It was amazing working on this song and it will be something I will remember for the rest of my life. While, one would expect there to be delays because of the current situation, I have to give credit to Tulsi because she recorded and shot it amazingly within a limited time frame. This is an actual collaboration where Tulsi and I were involved at every stage and worked really hard on every aspect, right from its creation to its final output.”

Says T-Series head honcho Bhushan Kumar, “The lockdown has made all of us appreciate the finer things in life and count our blessings. I’m confident that Tere Naal will resonate with everyone at this time, as there is a lot of innocence and purity in this song that people will relate to.”

Bhushan Kumar’s T-Series presents ‘Tere Naal’. Sung by Tulsi Kumar and Darshan Raval, the song has been written by Gurpreet Saini and Gautum Sharma and composed by Darshan Raval. Tere Naal will be out soon on the T-Series’ YouTube channel.