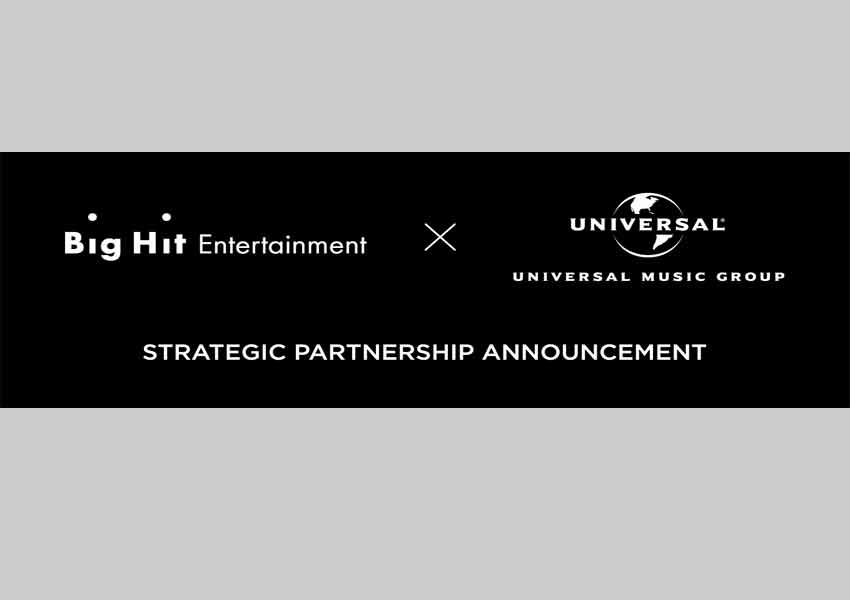 Good news for K-pop music lovers and artists all over the world. Now your fandom is going to reach the remotest places on the planet as Big Hit Entertainment and Universal Music Group tied up to launch a new JV Label with Geffen Records.

The partnership will see the debut of a new K-pop group for the global market. This boy group will be selected through a worldwide audition to be telecasted in 2022.

The main aim of the partnership is to encourage budding K-pop artists with programs like Big Hit’s Weverse and Venewlive which increases their outreach by providing unique communications and fan experiences.

Lenzo Yoon, CEO Global & Business, Big Hit Entertainment, said, “We will strive to secure competitive platform leadership and develop a top group of artists through the close partnership between our two companies, enabling K-pop to transcend all borders and languages.” He added, “This project is especially significant as it will apply Big Hit’s ‘success formula’ established over the past 16 years to the U.S., the center of the global music market.”

Sir Lucian Grainge, Chairman & CEO, Universal Music Group, said, “With their innovative approach to developing artists and embracing new technology, Big Hit has become one of the most dynamic companies in music entertainment. We’re thrilled to be working together as we launch a new joint venture between our companies that will further accelerate K-pop as a global cultural phenomenon.”

In a major development, Big Hit Entertainment (Big Hit) and Universal Music Group (UMG) announced an expanded strategic partnership that will see the two companies work closely together to increase opportunities for artists through innovation and technology, whilst expanding the global reach of K-pop music and culture around the world.

Bang Si-Hyuk, Chairman & CEO, Big Hit Entertainment, said, “Our two companies indeed share values and visions in that we both pursue constant innovations and are committed to providing our fans with genuine music and content of the highest and uncompromising level of quality.” He added, “In this sense, I strongly believe that UMG and Big Hit will create a synergy that will rewrite the global music history.”

K-pop in the US

Making the joint announcement today via KBYK’s VenewLive platform, the two companies also announced the exciting details of a history making project to assemble and debut a new global K-pop boy group together in the U.S. for the first time.

The new artist project will be released under a new JV label to be created between Big Hit, the global powerhouse team behind the phenomenal worldwide success of Grammy-nominated group BTS, in partnership with UMG’s Geffen Records, a historic label that has helped shape global youth and musical culture over the past 40 years through iconic artists including: Nirvana, Guns N’ Roses, Elton John and Avicii, alongside 2021’s breakthrough global pop artist Olivia Rodrigo, to name a few.

The newly created label will operate from Los Angeles and will work closely alongside teams from Big Hit America, Geffen Records and UMG to successfully launch this project.

John Janick, Chairman & CEO, Interscope Geffen A&M, said, “We are all incredibly excited about this joint venture project between Geffen Records and Big Hit. This partnership offers both of us an incredible opportunity to work together helping to shape the future of music globally to the benefit of artists and fans alike.”