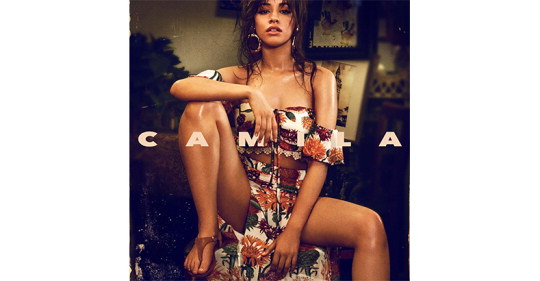 Multiplatinum global superstar Camila Cabello will release her self-titled full-length debut, Camila [SYCO/Epic Records], on January 12, 2018. The pre-order just went live today. It immediately unlocks instant grat downloads of “Never Be The Same” and “Real Friends.” Earlier this week, she personally announced the title and release date and revealed the cover art on Instagram. The post rapidly cracked 1 million “likes,” while the hashtag #CAMILAoutJanuary12 exploded as a Twitter trending topic, soaring to #2 worldwide and #5 US on the trending charts.

A powerful, passionate, and personal journey for the singer, Camila represents a major milestone. She describes it as “the soundtrack to the past year of my life,” inviting listeners closer than ever before.

The album features the international mega-hit “Havana” [feat. Young Thug]. It is currently #1 on the Pop Radio Chart in addition to remaining #2 on the Billboard Hot 100 for five consecutive weeks.

Lighting up airwaves, “Havana” is the superstar’s second Top 40 #1 as a solo artist following a previous number one for “Bad Things” with MGK. Moreover, she becomes “the first debut female artist of 2017 to reach #1 at Top 40.” At radio, According to Billboard, she emerges among a select group of “artists who had notched multiple number ones with and without a group,” placing her in good company with Beyoncé, Justin Timberlake, and Adam Levine. Her streak at the top shows no signs of slowing down either.

“Havana” stands out as the biggest smash of her career to date. It recently vaulted to #1 on the iTunes Overall Top Songs Chart, #2 on the Spotify Top Global Chart, and #3 on the Spotify Top U.S. Chart as she became the “4th most streamed artist in the world” on Spotify.

Total Spotify streams have surpassed 406 million, while the music video is quickly closing in on 301 million YouTube/VEVO views. Recently, it climbed to #1 in the UK and has held that spot for five consecutive weeks, making her the longest-running female #1 since Adele.

Continuing to heat up, “Havana” earned an RIAA double-platinum certification. In addition, she teamed up with Daddy Yankee for the Official Remix of the song, which features the songstress singing the song in Spanish for the first time!

Last month, she jetted across the pond to perform “Havana” at the MTV Emas. The show-stopping set became one of the night’s most talked about moments. It follows up her electrifying performance of the single at the Latin American Music Awards.

The runaway success of “Havana” continues to translate around the globe with platinum certifications in Canada, Australia, Sweden, and Ireland and gold in New Zealand, Norway, and Chile. In addition, it spent two consecutive weeks at #2 on the official singles charts in the UK, Australia, and New Zealand. Moreover, it remains among Top 5 for airplay in the UK, Australia, Ireland, and New Zealand as well as Top 10 in Germany. On iTunes, it clinched #1 on iTunes in 80 countries, including the UK – for two straight weeks – Ireland, Brazil, Mexico, New Zealand, Spain, Portugal, Greece, The Philippines, Singapore, Indonesia, and more. Meanwhile, it’s Top 10 in 88 countries and counting. At Spotify, the single is top 10 in 31 countries, namely the UK, Canada, New Zealand, Australia, the Netherlands, Germany, and across Asia. It’s the top-selling song globally on iTunes for 28 days and counting.

Tags:
Previous Article
Amazon.in adds to your Celebration with the Christmas Store
Next Article
News18 India’s second edition of ‘Chaupal’

Camila Cabello’s album CAMILA climbs to the No. 1 spot on Indian iTunes Chart