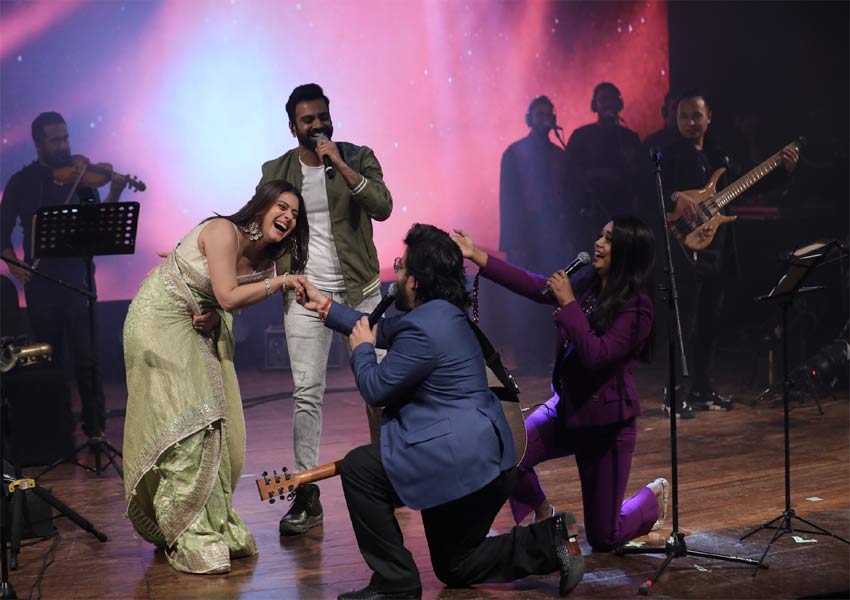 9XM was invited by the Indian Army to celebrate the cultural evening of the Army Investiture Ceremony 2020 of the Southern Command. The Channel collaborated with ace music composer, Pritam and curated an evening of music and entertainment under the on-ground property called 9XM On Stage. This on-ground event, 9XM On Stage with Pritam, will be televised on Sunday 22nd March on 9XM at 11 am and at 12 noon on 9X Jalwa, on the same day.

9XM On Stage with Pritam will be an absolute delight for television viewers and Bollywood music lovers. The show has an impressive line-up of young talented singers who not only mesmerized the guest at the event with their singing prowess but also entertained them with some great live-wire performances. Singers such as Shalmali Kolgate, Nakash Aziz, Amit Mishra, Antara Mitra, Sreeram Chandra and Shashwat Singh enthralled the audiences.

The super talented actor Kajol was a guest at the event. Seeing Kajol in the audience Pritam was pleasantly surprised and he invited her on stage saying he always wanted to sing ‘Gerua’ live for her. The sport that she is, Kajol happily went on stage and stunned everyone with some superb dance steps as Pritam and team sang Gerua. It was an absolute treat for the audience!

Commenting on the telecast of 9XM On Stage, Amar Tidke Chief Programming Officer, 9X Media said, “9XM On Stage celebrates the best of Bollywood music through large format on-ground experiences which are also aired on the Channels. We all have been fans of Pritam’s music and watching him perform is mesmerising and a totally unique musical experience. The Audiences’ reaction to it all was simply overwhelming! Smashing super hits such as Gerua, Dangal Dangal, Bulleya, Kabira, and many many more were belted out one after another, it was masterfully curated.  I am sure that the on-air show will be a treat to watch.”