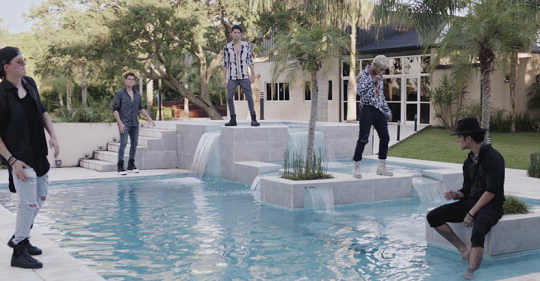 CNCO, one of today’s most acclaimed and successful Latin bands, is gearing up to the release of their highly anticipated sophomore self-titled album, available now for pre-order. Those who pre-order the album will get an instant digital download of the track “Mi Medicina”. The album will be officially released on April 6, via Sony Music Latin.

Recorded across the globe while the band was on tour and at their home base in Miami, CNCOtakes the artists’ talents in new directions that are sure to surprise new audiences. The impressive list of composers and producers that worked on the album includes: Icon Music, Edgar Barrera, David Cabrera, The Swaggernautz, Yasmil Marrufo, Mario Caceres, Frank Santofimio, Andy Clay, Matt Rad, Dabruk and Pinto Wahin, among others.

The band collaborated writing tracks such as “Bonita” and “No Me Sueltes” with the Icon Music Team. Their new production also includes outstanding collaborations with reggaetón legend Yandel in the successful first single of this album: “Hey DJ,” and with Little Mix in “Reggaetón Lento (Remix).”