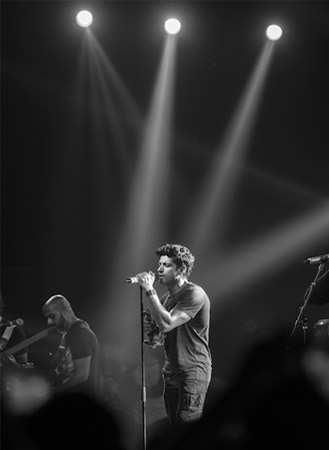 The Delhi edition of Gaana Bollywood Music Project, Asia’s largest multi-genre Bollywood music festival, is set to take off for the 2nd time at Jawaharlal Nehru Stadium Grounds on January 27 and 28, 2018 with a line-up featuring some of the biggest names in Bollywood music across genres.

The second season of Gaana Bollywood Music Project will see performances by multifaceted star Actor, film-maker and singer performer Farhan Akhtar who will be seen performing with his rock band Farhan Live. The audience will a get to chance to witness the multi-talented film director, screenwriter, producer, music composer and playback singer Vishal Bhardwaj perform at the festival. Other artists performing this season are Amitabh Bhattacharya, who will perform for the first time, playback singer Shalmali Kholgade will perform her favourite Bollywood songs, The Suryansh Project also known as The King of unplugged, Rock Qawwali ft Farhan Sabri, Paras Maan & Prithvi Gandharv and many more like Ashish Chhabra, Milind Gaba-Mellow D, Zephyr & Simar Kaur and Zublee Baruah ft. Gaurav Dutta & Goldie Sohel.

This season of Gaana Bollywood Music Project is a well curated mix of nearly every genre in Bollywood music.  Music is a blissful art, admired by everyone. Music can be divided into numerous genres based on elements, temperament, tone, etc. The Delhi audience will enjoy various flavours of music like Sufi, Hip-Hop, Qawwali, Punjabi, Folk, Pop, Commercial, Electronic and Unplugged.

Vishal Bhardwaj, Filmmaker and singer-composer said, “In India, people mayforget a film, but if a song becomes popular, they always remember it. Music is food for my soul. Gaana Bollywood Music Project in Delhi is going to be an amazing experience.”

Actor, film-maker and singer performer Farhan Akhtar said, “I am looking forward to perform for my fans in our capital. Playing in Delhi is special as the audience always gives us a lot of love. To connect with them through my music is very exciting and this time it’s happening at the Gaana Bollywood Music Project along with other performers. Fun times await.”

Speaking on the festival, Swaroop Banerjee (CEO, Event Capital) said, “We received incredible love and support in the first season and we are working towards living up to it in the second. Over 50 performers will take up two main stages and entertain fans of Bollywood music for two whole days. The festival installations are going to be larger than life and the F&B experience has been curated keeping in mind the family audiences in Delhi. Gaana BMP fans will see a collaborative mix of Bollywood Punjabi, Hip Hop, Sufi, Romance, Folk, Funk and Pop, making this the only complete multi-genre Bollywood music ensemble anywhere in the world and it gives me immense pride to showcase our own music in the heart of the Indian Capital.”

Prashan Agarwal ( COO – Gaana) said , “As a brand, we believe in building experiences that have power to profoundly impact emotions and memories of our audiences, Music festivals like Gaana Bollywood Music Project provides a unique opportunity for artists and fans to forge meaningful personal connections. Nothing comes quite as close to the exhilaration of seeing your favorite artist perform live, the act of sharing the moment with a community of fellow fans, sweating it out together as you scream lyrics from the top of your lungs – that’s when real memories are formed and relationship with brand gets even more stronger”.